Opening a major conference on Somalia, United Nations Secretary-General António Guterres today urged the international community to support security efforts in the country battling Al-Shabaab and aid the more than six million Somalis affected by the violence and a deadly drought.

“We are here to listen to Somalia’s leadership – and to agree on a framework for cooperation,” Secretary-General António Guterres told the heads of State and Government from across East Africa and other key partners at the London Somalia Conference 2017.

Mr. Guterres noted that Somalia is at a moment which is both “tragic and hopeful” and “can be in the near future the kind of good news that we badly need” in the world.

A legitimate Federal Government was established in 2012 in Somalia, and Al-Shabaab was pushed out of several key cities by the UN Security Council-mandated African Union Mission to Somalia (AMISOM).

Fighting continues to devastate the country, however, with violations of human rights and international humanitarian law occurring with impunity, Mr. Guterres noted.

He highlighted the need for predictable funding for AMISOM, and suggested the possibility of assessed contributions. The AU force was created 2012 and began fighting before it had helicopters, night vision systems or armoured vehicles. 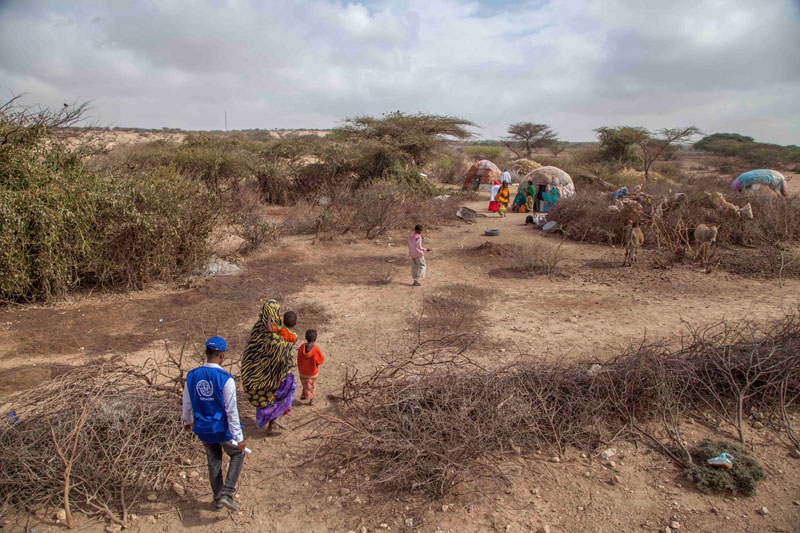 “This is something that we need to solve to give AMISOM the capacity to really create the conditions to allow the Government and the new security institutions of Somalia to then be able to assume the responsibility of the security of their own country,” he said.

Mr. Guterres also called for greater coordination in support of the Somali Government to build up the Somali National Army and the Somali Police to create the conditions for a unified national army and a unified police front.

Somalia is facing prolonged drought which has left more than half the population of the country in need of humanitarian assistance. The situation continues to deteriorate and the possibility of famine in 2017 remains very real, despite an already massive scale-up of assistance since the beginning of the year.

The ongoing conflict is exacerbating the drought, leading to what could be one of the biggest humanitarian disasters since World War II.

In his opening remarks, Mr. Guterres called for an additional $900 million to aid the 6.2 million people whose crops have withered, livestock has died and waterholes have dried up.

Some 275,000 malnourished Somali children are currently at risk of starvation, according to UN figures.

“If there is an image that I will never forgetin my life it is [the one] of children dying already, where they could [have been] assisted because they just arrived too late,” Mr. Guterres said speaking at an event on a response to the humanitarian crisis.

The UN chief had travelled two months ago to the capital, Mogadishu, and Baidoa, in the south-western Bay region, to ask the people in Somalia if they were receiving aid and to appeal for more support from the international community. “Somalia now hangs in the balance between peril and potential. Here in London, we can tip the scales from danger to safety,” said Mr. Guterres.

At the end of the day, Mr. Guterres spoke alongside Boris Johnson, Secretary of State for Foreign and Commonwealth Affairs of the United Kingdom and Northern Ireland, and Mohamed Somali President Abdullahi Mohamed Farmajo.

“This conference was an unmitigated success,” Mr. Guterres said.

He reiterated that the international community needs to massively support Somalia by responding to its humanitarian appeal, fully support the Government in building up national institutions and AMISOM, and support the new National Development Plan of Somalia.