Observing the Day of Vesak, United Nations Secretary-General António Guterres called on the global community to draw inspiration from the journey of Lord Buddha and embrace his message of compassion.

“Born a sheltered prince, Shakyamuni went out into the world to confront and overcome human suffering,” said the Secretary-General in his message on the occasion.

“This message of compassion is timeless,” he said.

Vesak, the Day of the Full Moon in the month of May, is the most sacred day to millions of Buddhists around the world.

Further in his message, Mr. Guterres also emphasized that in today's interconnected world, there can be “no peace as long as others are in peril, no security as long as others suffer deprivation [and] no sustainable future until all members of our human family enjoy their human rights.”

“On this Day of Vesak, let us celebrate the wisdom of Lord Buddha by taking action for others with a strong spirit of solidarity,” noted the UN chief, extending his wishes to all those celebrating the occasion.

In 1999, the UN General Assembly adopted a resolution in which it recognized the International Day to acknowledge the contribution that Buddhism, one of the oldest religions in the world, has made for over two and a half millennia and continues to make to the spirituality of humanity. 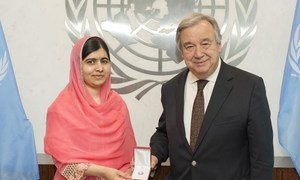