UNICEF/Alessio Romenzi
A family displaced by fighting between ISIS and Iraqi security forces carry their belongings as they walk through the destroyed western neighbourhood of Al Mamum, near Mosul, Iraq.
9 May 2017

As a new front opens in the fight between Iraqi forces and the group known as the Islamic State in Iraq and the Levant (ISIL/Da’esh) in north-western Mosul city, United Nations humanitarian staff are raising concern about hundreds of thousands of civilians still living in the area.

Speaking to reporters in New York, the Spokesperson for the UN Secretary-General said that some 360,000 people are believed to be caught between the fighters.

“Families continue to arrive at the newly established mustering point at Badoush, northeast of Mosul, along the Syrian highway, where emergency assistance and basic services are being provided by humanitarian partners,” Stéphane Dujarric said, citing information from UN humanitarian authorities.

Aid workers are responding to these and families still trapped inside “wherever access allows.”

They are providing emergency response packages with basic food, water and hygiene items. Some 2.6 million people have received aid since October.

The UN and partners is trucking 3.1 million litres of water per day into eastern Mosul to meet water shortages. That figure was about 2.3 million litres at the end of April.

In addition to aid, the UN is concerned about the high trauma and casualty rates.

Since 17 October, health care partners report over 12,000 people have been referred to hospitals in Mosul and neighbouring governorates, and nearly half of these reported cases were from west Mosul only, Mr. Dujarric said.

The UN Office for the Coordination of Humanitarian Affairs (OCHA) has said that new field hospitals have also been created, one for emergency reproductive and obstetric healthcare. 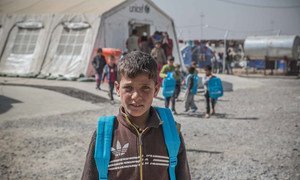 Safe drinking water is a major concern in Mosul, where a battle has been underway for the past six months to retake the city from the Islamic State of Iraq and the Levant (ISIL), the United Nations humanitarian arm has said