8 May 2017
The Prosecutor of the International Criminal Court (ICC) today told the United Nations Security Council that her Office is considering launching an investigation into alleged migrant-related crimes in Libya, including human trafficking.

“My Office continues to collect and analyze information relating to serious and widespread crimes allegedly committed against migrants attempting to transit through Libya,” said Fatou Bensouda during a Security Council meeting on the North African country’s situation.

“I’m similarly dismayed by credible accounts that Libya has become a marketplace for the trafficking of human beings,” she added, noting that her Office “is carefully examining the feasibility” of opening an investigation into migrant-related crimes in Libya should the Court’s jurisdictional requirements be met.

“We must act to curb these worrying trends,” she said.

Ms. Bensouda said that reports indicate the country is at risk of returning to widespread conflict, and such an outcome would not bode well for the rule of law in Libya, and will surely aggravate a climate of impunity, which could in turn lead to widespread human rights abuses and violations of international humanitarian law.

Turning to specific cases before the Court, she said that her office has alleged Al-Tuhamy Mohamed Khaled, the former head of the Libyan Internal Security Agency under the Muammar Gaddafi regime, is responsible for crimes against humanity and war crimes.

The pre-trial chamber of the Court found reasonable grounds to believe that the Internal Security Agency, led by Mr. Al-Tuhamy, along with other Libyan military, intelligence and security agencies, arrested and detained persons perceived to be opponents of Mr. Gaddafi and his rule.

The prosecutor said these persons were allegedly subjected to various forms of mistreatment, including severe beatings, electrocution, acts of sexual violence and rape, solitary confinement, deprivation of food and water, inhumane conditions of detention, mock executions, and threats of killing and rape, in various locations throughout Libya.

Ms. Bensouda urged Libya as well as State or non-State parties to take immediate action to verify the suspect’s whereabouts and facilitate his arrest and surrender to the Court.

She said the Court “unsealed” its arrest warrant for Mr. Al-Tuhamy to enhance the chances of justice being done. 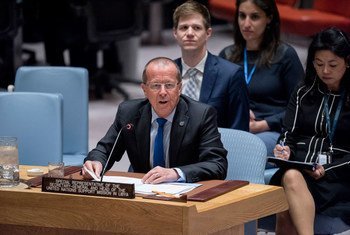 19 April 2017
It is more important than ever to forge unity within Libya, the United Nations envoy for the country told the Security Council today, while he called on Libyan stakeholders to regain the optimism generated by the 2015 Political Agreement, which has faded and is being replaced by “frustration and disappointment.”