UN Mission/Juan Manuel Barrero Bueno
President Juan Manuel Santos Calderón of Colombia (right), greets Ambassador Elbio Rosselli, President of the Security Council for the month of May, in the Colombian capital Bogotá.
4 May 2017

In Colombia to acknowledge and witness first-hand both the progress and the challenges of carrying out the aims of a hard-won peace deal, a delegation from the United Nations Security Council today met President Juan Manuel Santos and applauded the country as an example for overcoming difficulties and setbacks to bring to an end more than a half a century of conflict.

Speaking to reporters in Bogota, Elbio Rosselli, of Uruguay, which holds the Council’s presidency for the month, said that "with the process of pacification of Colombia, the American continent is the only region of the world in which there is no active conflict."

"We thank you for the example you are giving. These processes are never linear, they have ups and downs, they may have setbacks but what matters is to maintain the effort. This Security Council is committed to providing the support that Colombians want and deserve, "said Mr. Rosselli.

In early October 2016, Colombian voters narrowly rejected the historic peace accord between the Government and the Revolutionary Armed Forces of Colombia-People’s Army (FARC-EP). That deal was the culmination of four years of talks hosted in Havana, Cuba, between the two sides, and which led to a cessation of hostilities and agreements on key issues such as political participation, land rights, illicit drugs and victims' rights and transitional justice. The two sides signed a new agreement in late November 2016.

The Council delegation also met with Chancellor María Ángela Holguín, Ambassador María Emma Mejía, and the post-conflict cabinet. The Council gave a clear message of support to the implementation of the peace process in Colombia.

In his remarks to the press, president Santos said: "I want to highlight the way the United Nations has helped us to manage the cease-fire. More than 2,670 lives have been saved so far in the peace process."

United Kingdom Ambassador Matthew Rycroft, co-leader of the visit with Uruguay, highlighted the full support of the Security Council and the international community to make the peace process a reality.

"This is a once in a lifetime opportunity for Colombians, make sure that all the parties fulfil all of the commitments and finally the peace that your country deserves will be a reality, from which there cannot be a turning back," said Ambassador Rycroft.

Before leaving New York, Mr. Rosselli noted that it is time for the Council to make contact with all parties in the process, in order to see how the UN is helping and can continue to do so.

The visit follows a recent announcement by the UN Mission in Colombia that it hopes to receive 60 percent of all FARC-EP arms. 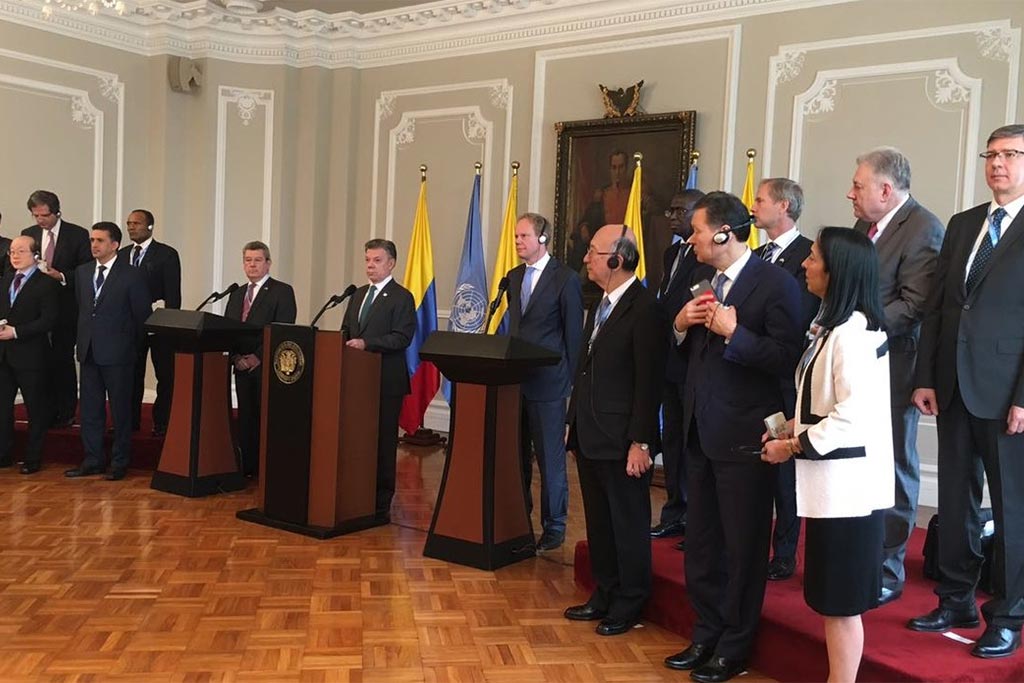 Members of the Security Council brief the press together with the President of Colombia Juan Manuel Santos. Photo: UN Mission in Colombia

Mr. Rosselli also said that the Council not only wants to recognize the importance in relation to the Colombian ceasefire and the laying down of arms, but also inform itself about the substantive part. Late September last year representatives of the Government of Colombia, as well as members from the FARC-EP and international observers from the UN mission in the country started working together at the joint Monitoring and Verification Mechanism headquarters in Bogota.

Verification of the bilateral ceasefire and cessation of hostilities in Colombia is part of the Mechanisms task, and according to the UN Mission in the South American country, they also have been planning and coordinating logistics for the regional offices and the zones where the separation of forces has been taking place.

Earlier this year UN News reported that at eight regional and 26 local sites, FARC-EP and Government members, along with 350 UN observers, have been working together to verify the parties' commitments towards the ceasefire and cessation of hostilities.

The UN Mission in Colombia reported today that to-date they have received and stored a thousand weapons from FARC-EP combatants. The combatants are currently in camps established for their transition and reintegration into civilian life, but also to ensure the safety of the civilian population and of FARC-EP and Public Force members. 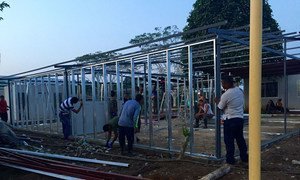 The United Nations Mission in Colombia is set to register some 7,000 weapons this weekend, but the search for other caches of weapons hidden by the Revolutionary Armed Forces of Colombia-People’s Army (FARC-EP) continues, the Mission’s chief has said.