The figure is “down 1.8 per cent from March although remaining 10 percent higher than a year earlier,” according to FAO.

The Sugar Price Index is down 9.1 per cent due to large export supplies from Brazil and a continued weak global import demand.

Oil fell 3.9 per cent, pushed by weakening demand for palm oil and expectations of bumper soy harvests and planting in South and North America.

Dairy also fell, about 3.3 per cent, while meat prices rose 1.7 per cent, led by a strong domestic demand for pork in the European Union and increased sale in China.

The Cereal Supply and Demand Brief is expecting a drop in the in the cereal stocks-to-use ratio in 2017/18 to 25.8 per cent, “still a comfortably high figure in historical terms but slightly below the current season's level,” the UN agency said. 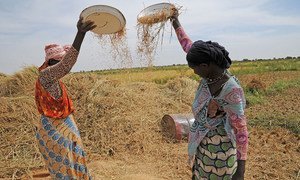