The head of the United Nations emergency food relief agency today appealed for “regular, unimpeded and sustained” humanitarian access during meetings with senior government officials and partners in Lebanon and Syria – his first official visit since assuming office.

David Beasley, the Executive Director of the UN World Food Programme (WFP) today wrapped up a three-day trip to the two countries to assess the growing needs. According to a press release, he spoke first-hand with Syrian refugee families in the Bekaa Valley and Beirut, and met with displaced women and children at a WFP distribution centre in Damascus.

“I am touched by the stories of the struggle and resilience of the many Syrians I met who are living away from home and loved ones,” Mr. Beasley said.

The UN agency provides monthly life-saving food assistance to more than four million vulnerable people each month inside Syria through regular deliveries as well as cross-border, cross-line and air deliveries to areas not reachable through regular means.

“In his meetings, Beasley appealed for regular, unimpeded and sustained humanitarian access to deliver urgently needed food assistance to people in besieged and hard-to-reach areas across war-torn Syria,” WFP reported.

He also commended Lebanon for its generosity in hosting over one million Syrian refugees.

During the trip, Mr. Beasley also visited warehouses, food distribution centres and WPF-contracted supermarkets where some of the most vulnerable refugees redeem monthly electronic vouchers.

In Lebanon, almost 700,000 vulnerable Syrian refugees receive food assistance through an electronic voucher (e-card) system. The e-cards are replenished each month with $27 per person, which can be used to buy food at one of 480 WFP-contracted shops across Lebanon.

AUDIO: The new Executive Director of the World Food Programme (WFP) has been hearing for himself "heart-breaking stories" of loss and need in conflict-affected Syria. Credit: UN News 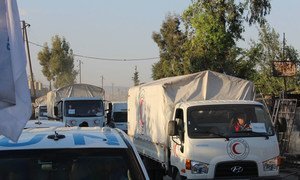 The United Nations today said that it remains deeply concerned by the deteriorating security and humanitarian situation in the eastern part of Syria’s Ghouta, where some 400,000 people are trapped.