UN Photo/Hien Macline
UNOCI officers conduct a disarmament, demobilization and reintegration operation with ex-combatants in the Abobo area of Abidjan in February 2012.
1 May 2017
Peace and Security

After 13 years, the United Nations is completing the peacekeeping phase of its engagement with Côte d'Ivoire, after successfully assisting the country in restoring peace and stability following the post-2010 election crisis.

When the UN Operation in Côte d’Ivoire (UNOCI) closes its doors on 30 June of this year, it will mark the most recent successful completion of a peacekeeping operation in West Africa since the UN mission in Sierra Leone in 2005.

This milestone was made possible thanks to a significantly improved security situation in Côte d’Ivoire, as well as the extension of State authority and the deployment of public services, the strengthening of democratic institutions, progress in security sector reform and steady economic development.

Headed most recently by the Secretary-General’s Special Representative, Aïchatou Mindaoudou, the civilian and military personnel of UNOCI played a critical role in the country, including with regard to protecting civilians, monitoring the ceasefire, assisting the Government with disarmament, demobilization and reintegration of former combatants, and countering hate messages on the airwaves with UNOCI FM.

UNOCI is in the process of delegating to the UN country team critical tasks necessary to ensure the sustainability of the gains achieved so far.

UN Special Representative Aïchatou Mindaoudou and local residents highlight the vital contributions UNOCI made in restoring peace and security in the nation.

Boots on the ground

In 2004 the country was divided in half by a civil war. Due to the lack of State authority, the Security Council adopted resolution 1528, establishing UNOCI for an initial 12-month period. One of the mission’s initial tasks was to monitor and support the peace agreement signed by the Ivorian parties the previous year. 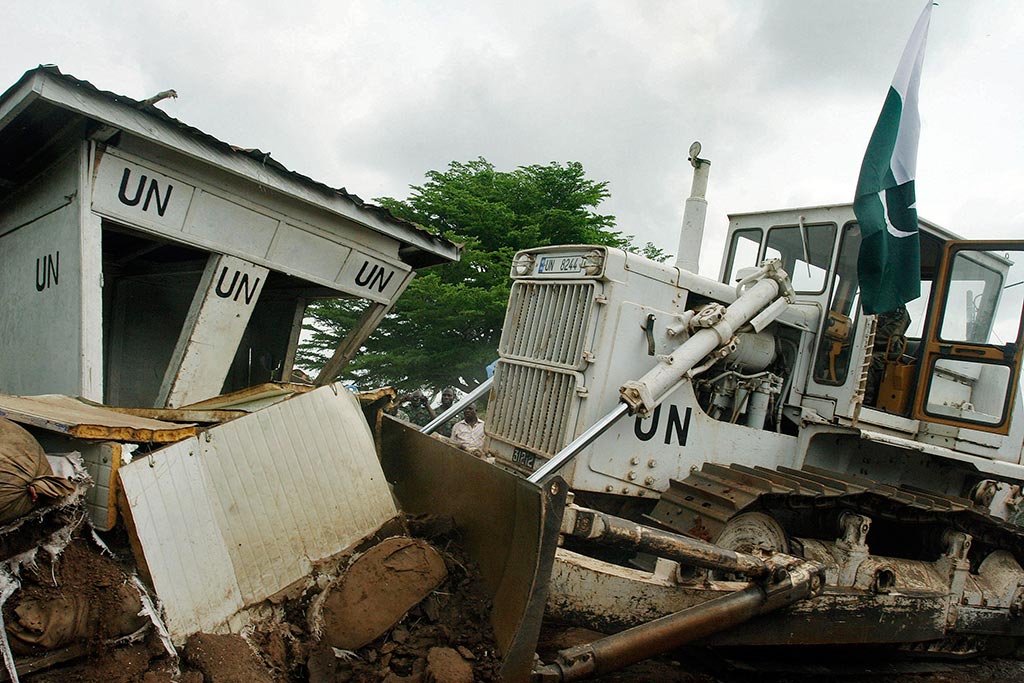 The dismantling of the Zone of Confidence in Tiebissou, Côte d'Ivoire, in April 2007. UN Photo/Ky Chung

Another primary duty was to monitor the Zone of Confidence – a swathe of land that separated the Government-ruled south and opposition-controlled north – while restoring trust between the parties to reunite the country.

In 2007, under the Ouagadougou Political Agreement, UNOCI set up 17 observation posts called the "Green Line" – replacing the Zone of Confidence – that remained in place until July 2008, when the last post had been eliminated. 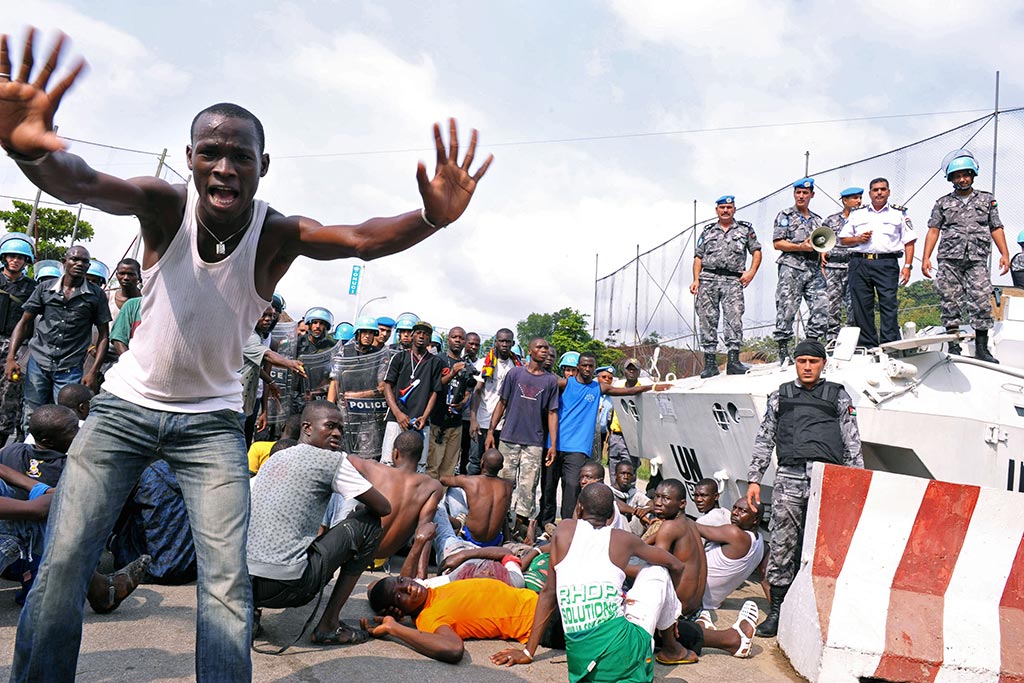 Throughout the years, UNOCI was called on to respond to numerous challenges. In January 2006, pro-government youth protesters took to the streets after a UN-authorized team supported terminating the Parliament, whose mandate had expired.

After four days of violent protests in which UN humanitarian and peacekeeping facilities were targeted, hundreds of UN personnel were evacuated.

The Security Council then decided to boost UNOCI’s strength with the temporary deployment of an additional battalion from the UN mission in Liberia.

Then in 2010, the country was thrust back into civil war when incumbent president Laurent Gbagbo refused to step down after losing the UN-certified election to Alassane Ouattara. Throughout a period of increased fighting, UNO CI continued to protect civilians, even as it was itself being targeted.

UN personnel seek refuge, in April 2011, in the basement of UNOCI Headquarters in Abidjan, after being shelled by forces loyal to former Ivorian President Laurent Gbagbo. Credit: UN Photo/Basile Zoma

Mr. Gbagbo eventually surrendered and Mr. Ouattara was inaugurated as president in May of 2011, but not before some 3,000 people were killed in the post-election violence and another 300,000 became refugees.

UNOCI facilitated an inclusive political dialogue, which culminated in two presidential and legislative elections in 2011 and 2016, and a referendum. Among its other achievements, the mission strengthened the National Commission on Human Rights, which helped decrease human rights violations, and helped to disarm 70,000 combatants and re-integrate them into society. 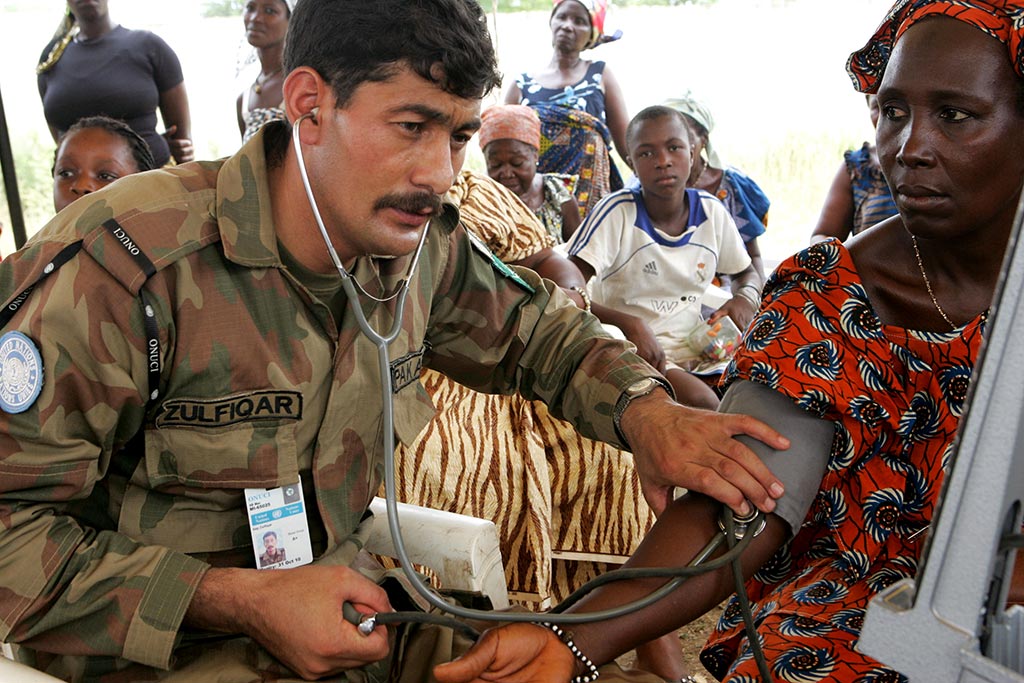 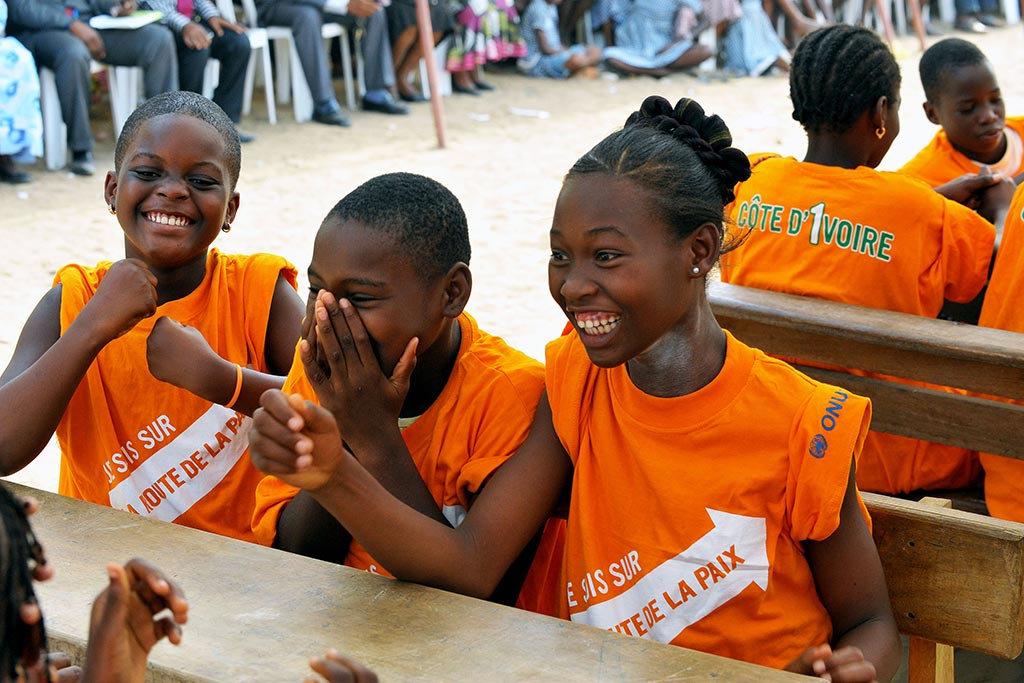 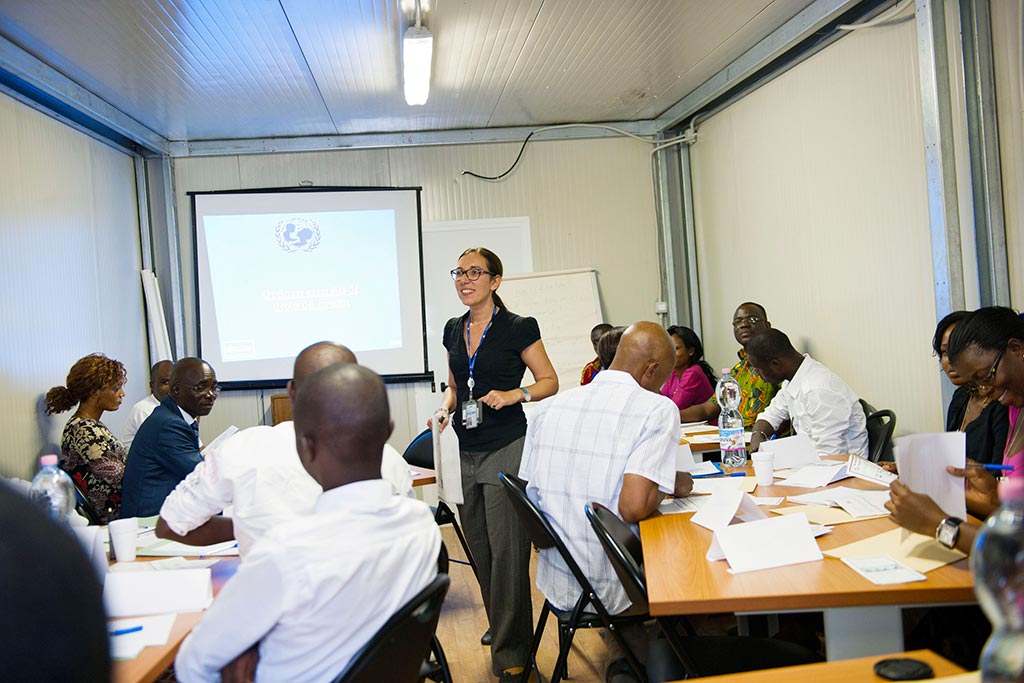 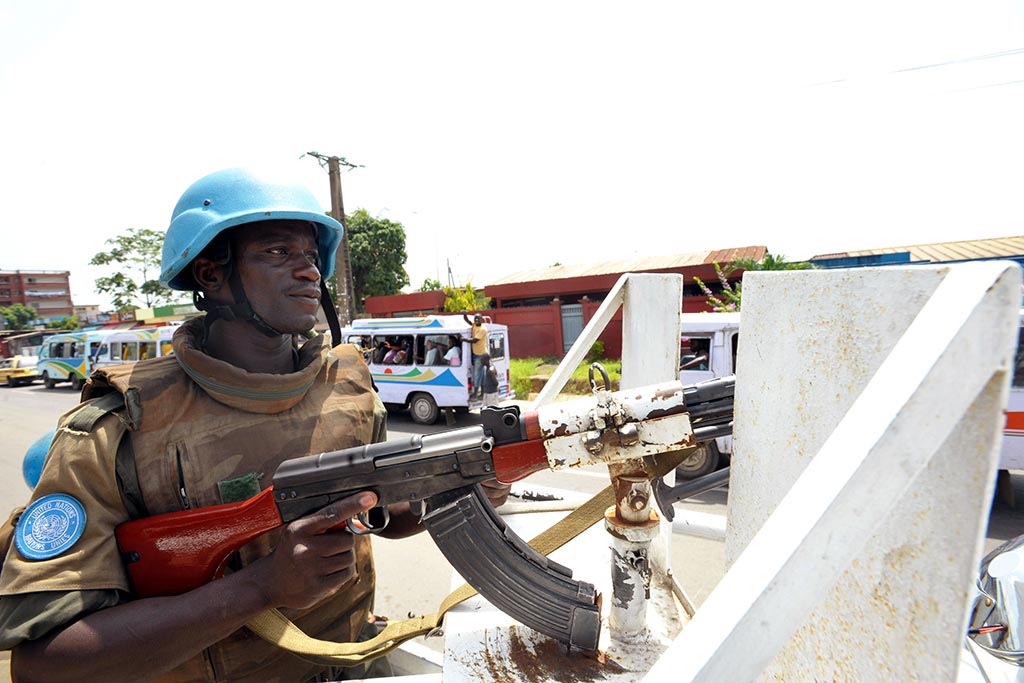 An officer with UNOCI is shown on patrol in the district of Abobo, Abidjan, in April 2011, in the days following the surrender of former president Laurent Gbagbo, which ended a months-long stand-off in which UNOCI staff had also been targeted. Credit: UN Photo/ Basile Zoma 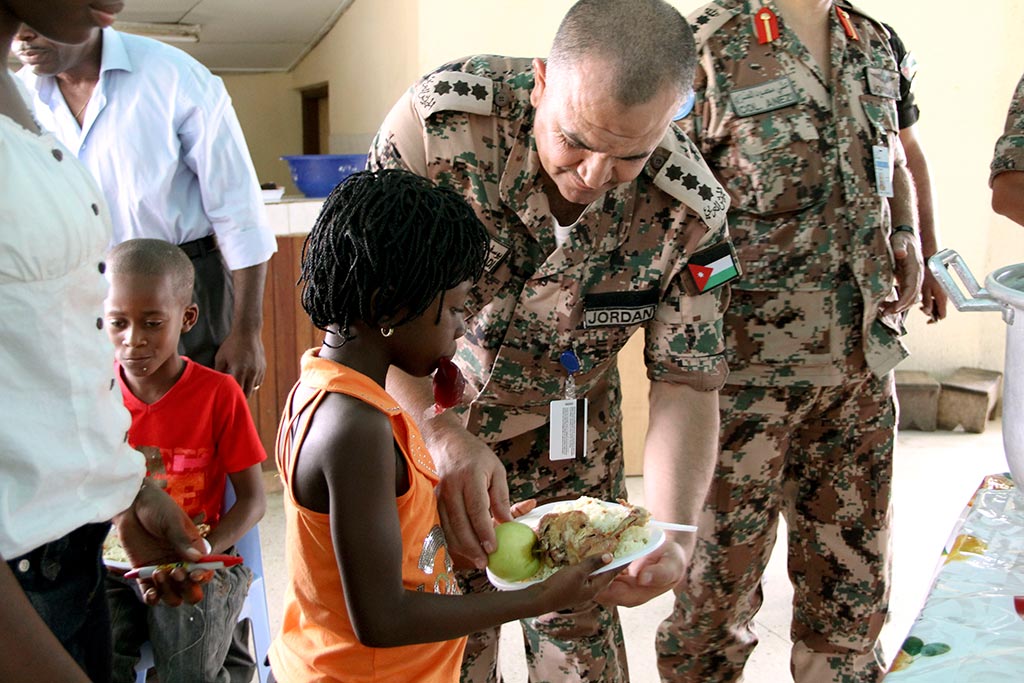 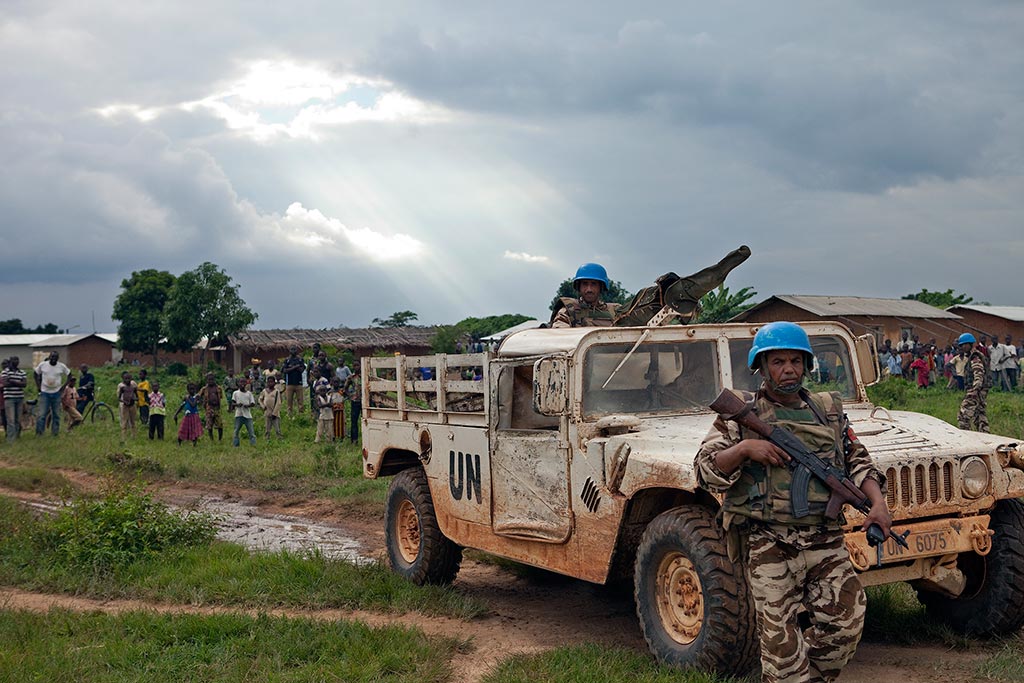 In July 2012, UN peacekeepers guard the building in Para where the former head of UNOCI, Bert Koenders, was meeting with village chiefs and other local leaders. One month earlier, seven UN peacekeepers serving with UNOCI were attacked and killed here. Credit: UN Photo/ Patricia Estev 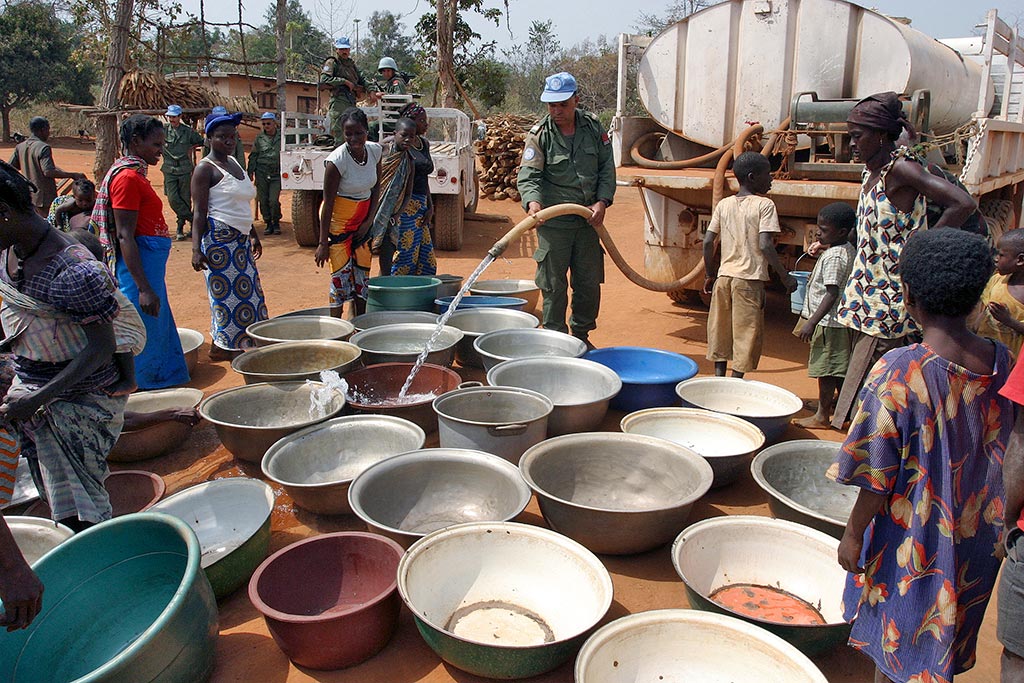 Members of the Moroccan battalion of UNOCI distribute water to villagers during a joint patrol with the members of the Licorne Forces – a French military operation in support of UNOCI – in January 2007. Credit: UN Photo/ Basile Zoma 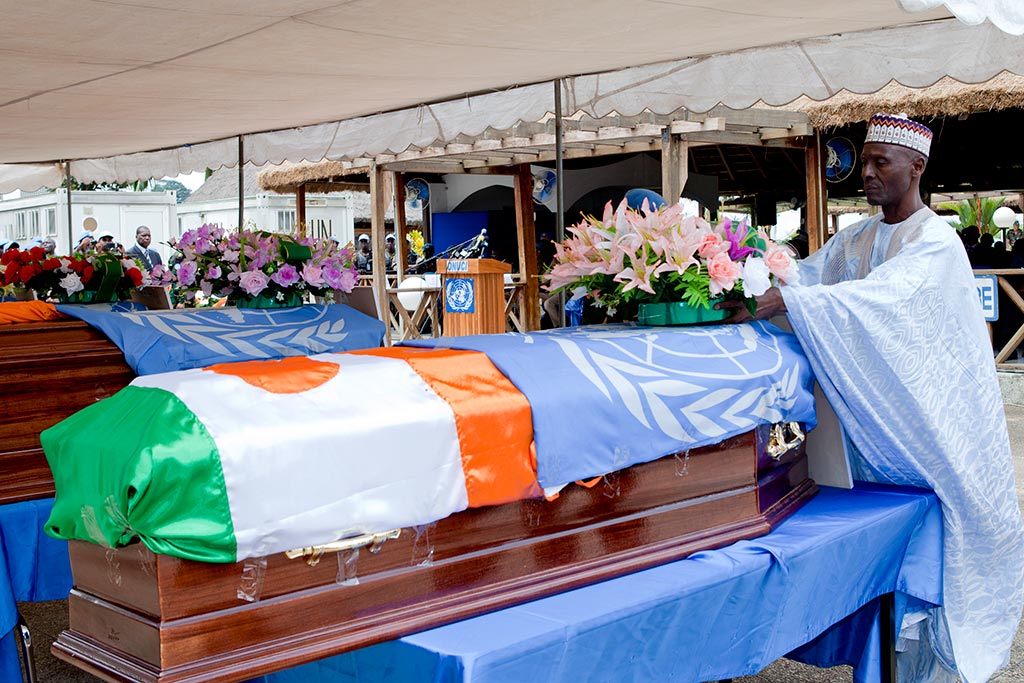 In 2012, a memorial ceremony was held for seven Nigerien UNOCI peacekeepers that were killed when unidentified armed elements assaulted their patrol. Credit: UN Photo/ Patricia Esteve 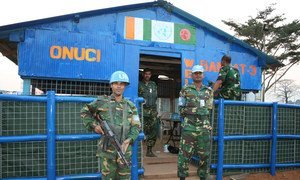 Côte d'Ivoire is on the path to durable stability, the United Nations envoy for the country today told the Security Council, but warned that authorities need to invest more in national reconciliation and transitional justice, and to improve the economic, social and cultural rights of Ivoirians.