Concluding a visit to Syrian refugee camps in Jordan where he met with young people displaced from their homes, an advocate for the United Nations Children's Fund (UNICEF) underlined the need to respect their rights and empower them so that they can grow to their full potential.

“Young people who survive war have an amazing ability to persevere and become the champions for peace that are so needed, despite the horrors they have been through,” said Ishmael Beah, the UNICEF Advocate for Children Affected by War, wrapping up his visit.

“I know from experience that all that pain, that unimaginable suffering, and that sense of loss of humanity, can all be refocussed towards something positive […] especially when you have someone who believes in you, supports you and extends a helping hand” he added.

Mr. Beah – internationally renowned for his books, A Long Way Gone: Memoirs of a Boy Soldier and Radiance of Tomorrow, a novel – is a former child soldier from Sierra Leone, forcibly recruited at the age of 13. His parents and two brothers were killed in the brutal conflict.

During his three-day visit to Jordan, the UNICEF Advocate visited the Za'atari refugee camp and a UNICEF-supported centre for learning and psychosocial support operated in the Jordanian capital Amman to amplify the voices of vulnerable children and young people affected by the conflict in Syria, which is now in its seventh year.

“These young people have been teaching me a lot in return,” said Mr. Beah after the trip. “These young people don't want to be pitied, they want to have their rights respected and be empowered so that they can grow to their full potential.”

UNICEF together with its partners has trained young people who are refugees or vulnerable host communities as researchers as part of an initiative to freely allow young people – many of whom dropped out of school and started working to help their families make ends meet – to learn about their lives and aspirations.

The research, which is based on the premise that young people are more likely to be open about their thoughts and feelings with other young people, is meant to contribute to better access to education and vocational training.

The training also equips vulnerable young people with skills to address issues like early marriage, protection against violence and hazardous types of labour. 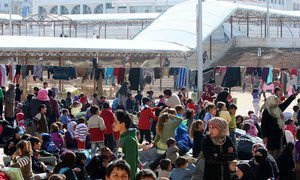 With fighting intensifying on numerous fronts in Syria over the past months, the top United Nations humanitarian official today urged consolidation of the nationwide ceasefire, most importantly a pause in fighting on the outskirts of Damascus, to enable the delivery of aid.