The United Nations human rights office today expressed deep concern about the executions of four men in the United States state of Arkansas, which were reportedly done within the span of eight days to make use of an expiring lethal injection drug.

“Rushing executions can deny prisoners the opportunity to fully exercise their rights to appeal against their conviction and/or sentence, and can also lead to States' shortening their clemency processes, thereby affecting prisoners' rights,” a spokesperson for the of the High Commissioner for Human Rights (OHCHR), Elizabeth Throssell told reporters in Geneva.

OHCHR noted that the executions had been stayed, but Arkansas Governor Asa Hutchinson decided to proceed with the executions because the State's supply of one of the drugs used in lethal injections – midazolam – was due to expire on 30 April and it was unclear whether further supplies could be obtained.

The use of midazolam has been criticized for failing to prevent suffering of pain, with reports of botched executions related to its use in the US states of Alabama, Ohio and Oklahoma.

The latest prisoner to be executed was Kenneth Williams, who was pronounced dead before midnight last night local time. Ledell Lee was executed on 20 April, and Marcel Williams and Jack Jones on 24 April.

The executions in Arkansas took place after a "12 year de facto moratorium” on the use of the death penalty in the state, Ms. Throssell said.

The number of death executions overall had declined steadily over the past few years, from 52 in 2009 to 20 last year. Since the start of 2017, 10 executions had been carried out.

The OHCHR spokesperson noted that the “the UN opposes the death penalty in all circumstances and we call on all Governments that retain it to establish an official moratorium on all executions with the aim of abolishing the death penalty.”

On 1 March, the Human Rights Council held a biennial high-level panel discussion on the human rights violations related to the use of the death penalty, in particular with respect to the prohibition of torture and other cruel, inhuman or degrading treatment or punishment. 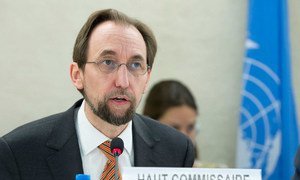 The United Nations human rights chief today reiterated his call to abolish the death penalty as it raises serious issues in relation to the dignity and rights of all human beings, including the right to life and the right not to be subjected to torture or to cruel, inhuman or degrading treatment.