The political process in South Sudan is not dead but requires significant resuscitation, the head of the United Nations peacekeeping mission in the crisis-torn country told the Security Council today.

“Regrettably, no party has shown interest in reviving the Peace Agreement,” said David Shearer, the Secretary-General’s Special Representative and the head of UN Mission in South Sudan (UNMISS), referring to the August 2015 accord between the country’s warring sides.

Despite the peace agreement, South Sudan slipped back into conflict due to renewed clashes between rival forces – the Sudan People's Liberation Army (SPLA) loyal to President Salva Kiir and the SPLA in Opposition backing former First Vice-President Riek Machar.

Mr. Shearer explained that unlike this time last year, where the conflict was construed on a bipolar basis, today the opposition has splintered, making it necessary for UN peacebuilding efforts to be more widely cast than previously.

He told the 15-member Council that, “virtually no part of the country is immune from conflict. Yet, there has been no concerted effort by any party to adhere to a ceasefire. Instead, we are seeing an intensification of the conflict over the past month.”

Mr. Shearer said that in some of the violence, Government forces have responded to attacks by opposition forces, notably in Wau and the Equatorias. In others, in contrast, Government-led operations such as those in Upper Nile and Jonglei appeared “more strategic in focus” and were aimed at taking opposition-held areas.

VIDEO: Noting the "deteriorating" situation in South Sudan, the Secretary-General's Special Representative, David Shearer, outlines the UN's efforts to deliver protection and assistance, while stressing the need to push for a political solution.

He stressed that the UNMISS will work together with partners on opportunities to forge a viable solution to end the hostilities.

“Despite what appears to be attempts by the parties to achieve victory through military means, a political solution is the only way forward for South Sudan,” Mr. Shearer said, noting that military offensives are fracturing groups and intensifying ethnic divisions to a degree that will hinder reconciliation.

To revive the political process, the international community must speak with one voice, he stated, urging the Security Council, the African Union, and the Intergovernmental Authority on Development (IGAD) to unite in dealing with the parties.

Since his appointment as Secretary-General’s Special Representative three months ago, he has travelled to all 10 of UNMISS’ main field offices.

He said that UNMISS directly protects over 220,000 displaced civilians in six different locations across the country, and the 12,000 UN ‘blue helmets’ and 2,000 UN police officers are vital to protect civilians more than ever.

AUDIO: Briefing the Security Council, UN Special Envoy David Shearer says that ending the hostilities in South Sudan should be the global community's number one priority. 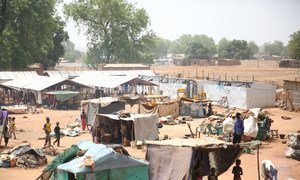 A lack of accountability for crimes perpetrated during the ongoing conflict in South Sudan remains one of the country's “biggest challenges,” the Human Rights Director for the United Nations Mission (UNMISS) said today as he wrapped up a visit to the north-western Wau region.