UNICEF/Algabal2017
People queue to fill containers with water from a tank provided by UNICEF in Sana'a, Yemen. Some 14.5 million people in the country have no access to safe drinking water and adequate sanitation.
24 April 2017

The United Nations together with the governments of Sweden and Switzerland will convene a one-day conference in Geneva, tomorrow, to draw global attention to the deepening humanitarian crisis in war-torn Yemen where millions are “close to a breaking point.”

According to the UN Office for the Coordination of Humanitarian Affairs (OCHA), nearly 19 million people in Yemen are in need of urgent humanitarian or protection assistance, including some 10.3 million who need immediate assistance to save or sustain their lives.

Senior UN officials, inducing Secretary-General António Guterres and the Organization's Emergency Relief Coordinator Stephen O'Brien, together with top officials from Swedish and Swiss Governments, will be speaking the opening of the event tomorrow.

The event also features thematic briefings from UN agencies and humanitarian organizations on the ground.

The two-year long conflict in Yemen has already displaced more than 3.3 million people and resulted in a breakdown in public services, particularly in health care with less than half of the health centres are functional and medicine and equipment are limited.

Access to safe water also remains a challenge and there is a lack of proper sanitation, increasing the risk of communicable diseases.

Yemen is also the most food insecure country in the world and millions are also at the risk of a 'man-made' famine.

Over 17 million people are currently food insecure, of whom 6.8 million are severely food insecure and require immediate food assistance. Of particular concern is the condition of nearly two million children suffering from acute malnutrition.

In February this year, OCHA together with partners launched a $2.1 billion appeal for its 2017 humanitarian response plan for the country. The money is crucial to fund food, nutrition, health and lifesaving assistance programmes.

However, only 15 per cent has been received, representing a massive $1.8 billion funding gap. 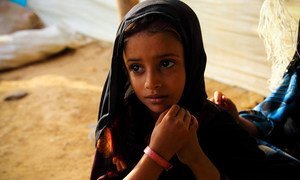 Millions in Yemen on brink of famine, situation ‘close to a breaking point,’ warns UN agency