UN Photo/Evan Schneider
Tadodaho Sid Hill, Chief of the Onondaga Nation, delivers the ceremonial welcome at the opening of the Sixteenth Session of the United Nations Permanent Forum on Indigenous Issues.
24 April 2017

Speaking at the opening of the United Nations Permanent Forum on Indigenous Issues, senior UN officials today underscored the need to do more to ensure that indigenous peoples are able to benefit from global development agenda, including the 2030 Agenda for Sustainable Development.

“Far more needs to be done to fully realize the human rights of indigenous peoples,” said Durga Prasad Bhattarai, Vice-President of the UN General Assembly, on behalf of the President of the Assembly, Peter Thomson, underscoring the importance of the 2030 Agenda, the Paris Agreement on climate change and the Addis Ababa Action Agenda.

“Targeted strategies would ensure that indigenous peoples could fully participate in implementing those accords,” he added.

In his remarks, the Assembly Vice-President also highlighted that discussions were ongoing within the 193-member body on ways to enhance the participation of indigenous peoples within the Organization and urged UN Member States and indigenous peoples to participate in upcoming dialogues on a comprehensive draft text addressing the matter.

This year also marks the tenth anniversary of the UN Declaration on the Rights of Indigenous Peoples, a comprehensive statement emphasizing the rights of indigenous peoples to maintain and strengthen their own institutions, cultures and traditions and to pursue their development in keeping with their own needs and aspirations.

Underscoring the importance of the Declaration, Lenni Montiel, the UN Assistant Secretary-General for Economic Development, noted that as indigenous peoples continue to suffer disproportionately from poverty, discrimination and poor health care, the world “can do better.”

“[Indigenous peoples'] collective and individual rights are too often denied; this is unacceptable. […] we must do better,” he underscored.

Noting that indigenous peoples and UN Member States had requested increased engagement of the UN system, he spoke of the system's response, and cited further examples of efforts, including the International Labour Organization (ILO), UN Development Programme (UNDP), Food and Agriculture Organization (FAO) and the UN Entity for Gender Equality and the Empowerment of Women (UN-Women).

Such efforts would continue through the new international development phase guided by the 2030 Agenda, noted Mr. Montiel. 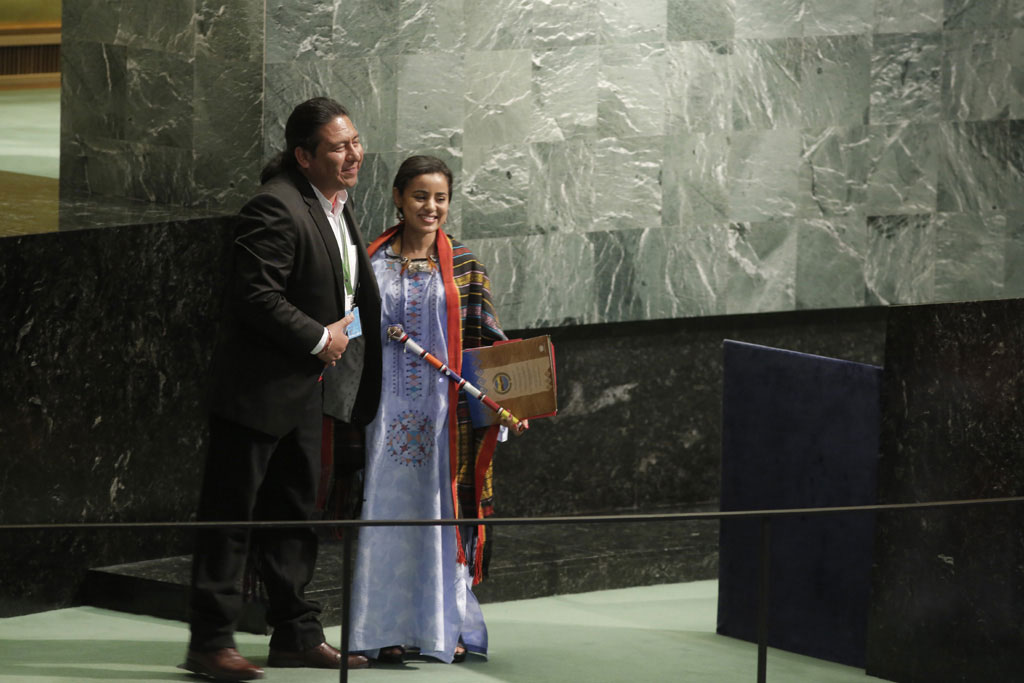 Also speaking today, Cristián Barros Melet, Vice-President of the Economic and Social Council, said that while the 2030 Agenda made a commitment to “leave no one behind,” voluntary national reviews on implementation had shown the risk of indigenous peoples being left behind.

“[As] an advisory body of the Council, the [Permanent] Forum has an important role to play in providing specialized advice and recommendations. It is essential to review progress made to date and to consider what additional efforts were required,” he said.

The Permanent Forum should meanwhile continue its collaboration with other Council bodies, noted Mr. Barros Melet, underscoring that its recommendations would help ensure that provisions of the Declaration were promoted. He also expressed hope that it would provide advice and guidelines which ensured indigenous issues remained an integral part of UN's work.

Also today, the Deputy Executive Director of UN Women, Lakshmi Puri, highlighted the importance of empowerment of indigenous women, noting that indigenous women and girls needed to be aware not only of their identity, but also their human rights, and they must claim those rights.

“No traditional culture or custom can be invoked to justify and perpetrate violence and harmful practices against indigenous women,” she said.

Highlighting the place of indigenous women and girls in the discussions and outcomes of the 2017 session of the UN Commission on the Status of Women, she said that the international community could no longer tolerate a situation in which such precious stakeholders and actors for sustainable development were not only left behind, but also the furthest to reach.

Within the UN system, the Permanent Forum is mandated to deal with indigenous issues related to economic and social development, culture, the environment, education, health and human rights.

It also works to raises awareness and promotes the integration and coordination of activities related to indigenous issues within the UN system; and prepares and disseminates information on indigenous issues.

Its current (sixteenth) session, the Permanent Forum runs until 5 May 2017.

The United Nations Department of Economic and Social Affairs has just released its 2016 Report on the World Social Situation, which includes important new findings about persisting inequalities in education and economic opportunity, and challenges the international community to work harder to break down barriers to participation.