On the eve of World Malaria Day, the United Nations health agency called today for accelerating scaled-up efforts to prevent malaria, which remains a major public health threat, killing one child every two minutes worldwide in 2015.

“WHO-recommended tools have made a measurable difference in the global malaria fight, but we need a much bigger push for prevention – especially in Africa, which bears the greatest burden of malaria,” said WHO Director-General Margaret Chan.

WHO said that since 2001, more than 663 million cases have been averted in sub-Saharan Africa, which shoulders 90 per cent of the global malaria burden. Insecticide-treated nets have had the greatest impact, accounting for an estimated 69 per cent of cases prevented through control tools.

However, WHO estimates that 43 per cent of people at risk of malaria in the region were not protected by either an insecticide-treated net or indoor insecticide spraying in 2015. About 69 per cent of pregnant women in 20 African countries did not have access to the recommended three or more doses of preventive treatment. 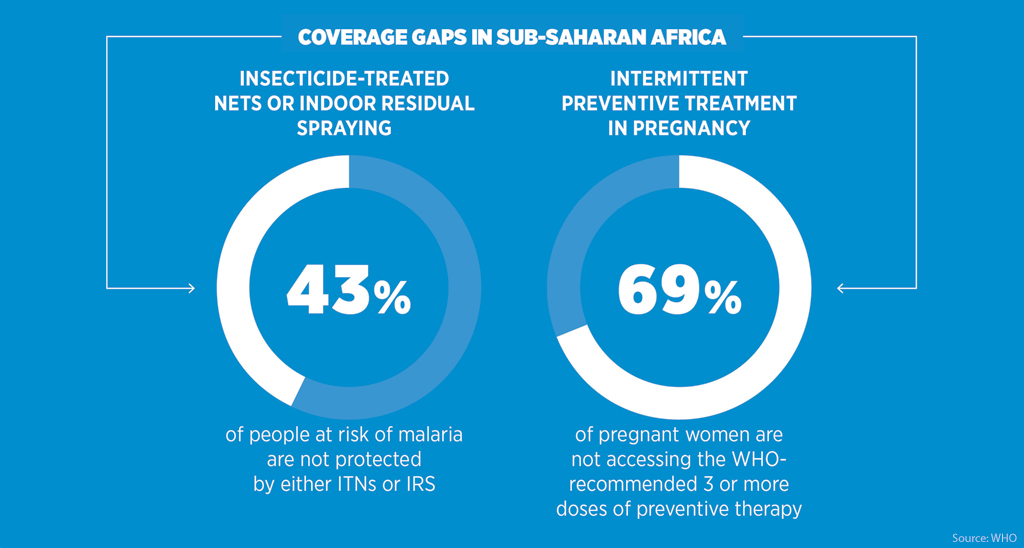 Together with diagnosis and treatment, WHO recommends a package of proven prevention approaches, including insecticide treated nets, spraying indoor walls with insecticides, and preventive medicines for the most vulnerable groups, such as pregnant women and children under the age of five.

Across the Sahel, where most malaria cases and deaths among children occur in the rainy season, WHO recommends seasonal malaria chemoprevention – a preventive therapy shown to reduce new cases of severe malaria in young children by roughly 75 per cent. As of 2015, 10 countries – Burkina Faso, Chad, Gambia, Guinea, Guinea Bissau, Mali, Niger, Nigeria, Senegal and Togo – had adopted the preventative therapy and begun implementing it.

“Any death from malaria – a preventable and treatable disease – is simply unacceptable,” said Pedro Alonso, Director of WHO's Global Malaria Programme. “Today we are urging countries and partners to accelerate the pace of action, especially in low-income countries with a high malaria burden.”

Ninety-one countries reported ongoing malaria transmission in 2015; all are working to reduce their malaria burden through the deployment and use of WHO-recommended preventive, diagnostic and treatment tools.

In recent years, seven countries have been certified as having eliminated malaria: United Arab Emirates (2007), Morocco (2010), Turkmenistan (2010), Armenia (2011), Maldives (2015), Sri Lanka (2016) and Kyrgyzstan (2016). This certification is granted by WHO when countries achieve at least three consecutive years of zero locally-acquired cases of malaria.

WHO said future progress in the fight to prevent malaria will likely be shaped by technological advances and innovations in new tools, including new vector control interventions, and possibly a vaccine.

World Malaria Day falls in World Immunization Week, 24-30 April, which celebrates the widespread use of vaccines that protect people against 26 diseases. Overall, vaccines prevent an estimated two to three million deaths each year.

Despite major progress in the fight against malaria, the mosquito-borne disease remains an acute public health problem, particularly in sub-Saharan Africa, home to 90 per cent of the world’s malaria cases, according to an annual flagship report by the World Health Organization (WHO).