A record number of people detained by Afghan police say that have been tortured or ill-treated in the past year, according to a new United Nations report, which notes however that the Afghan Government has committed to eliminating torture and ill-treatment in national detention facilities.

“The continuing torture and ill-treatment of conflict-related detainees is a matter of serious concern, but we acknowledge the genuine commitment and the efforts of the Government to deal with this issue,” said Tadamichi Yamamoto, the Secretary-General's Special Representative for Afghanistan.

The report, Treatment of Conflict-Related Detainees: Implementation of Afghanistan's National Plan on the Elimination of Torture, is produced by the UN Assistance Mission in Afghanistan (UNAMA) and the Office of the High Commissioner for Human Rights (OHCHR).

The findings are based on interviews with 469 conflict-related detainees conducted from 1 January 2015 to 31 December 2016 in 62 detention facilities administered by the National Directorate of Security (NDS), Afghan National Police (ANP) and other Afghan National Defence and Security Forces (ANDSF) across the country.

Some 45 per cent of the people interviewed said that they were tortured or ill-treated, according to UNAMA and OHCHR.

The figure represents “the highest level documented since UNAMA began its current monitoring programme in 2010,” according to the UN political mission.

Among other findings, the UN reported that about 45 per cent of those who were held in ANP custody reported torture – 38 out of 85 children interviewed – gave “credible” accounts of being tortured or ill-treated.

The torture appears to be linked to forcing confessions, according to the report, and stopped once detainees signed a “confession” – even in cases when the interviewed detainees did not understand or could not read what was written in the “confession.”

The UN High Commissioner for Human Rights, Zeid Ra'ad Al Hussein, has spoken out against torture of detainees, saying that confessions produced in this matter are “totally unreliable.”

“People will say anything to stop the pain,” Mr. Zeid said.

He called for proper monitoring of detention facilities in Afghanistan and meaningful investigations to ensure that those accused of torture are brought to trial and held accountable.

“Ensuring accountability for such acts sends a strong message and helps to prevent future violations,” he added.

The report does commend the Government, however, for implementing its National Plan on the Elimination of Torture.

If the proposed legislative changes are adopted, Afghanistan would formally recognize the UN Committee against Torture to conduct in-country visits to detention centres and establish an independent monitoring body to visit the sites, according to the report.

Among other recommendations, the report urges Afghan authorities to provide access for victims of torture to “effective legal remedy and reparation for harm suffered.” 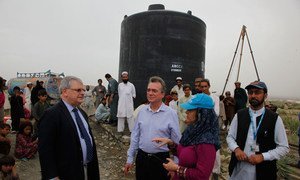 INTERVIEW: Mark Bowden on his time in Afghanistan and on revamping international aid

The conflict in Afghanistan is “partially forgotten,” the former United Nations Deputy Special Representative for the country has warned, calling for more aid for displaced families and a greater focus on bridging the poverty gaps.