UNICEF/Sokhin
A girl displaced with her family by Boko Haram insurgents from their home on an island in Lake Chad, in Melea village, Lake Region, Chad.
24 April 2017

Conflict and violence has driven more than 25 million children between 6 and 15 years old – about 22 per cent of children in that age group – from schools in warzones across 22 countries, the United Nations Children's Fund has said.

Conflict and violence has driven more than 25 million children between 6 and 15 years old – about 22 per cent of children in that age group – from schools in warzones across 22 countries, the United Nations Children's Fund (UNICEF) has said.

“At no time is education more important than in times of war,” Josephine Bourne, the Chief of Education at UNICEF, said in a news release issued today.

“Without education, how will children reach their full potential and contribute to the future and stability of their families, communities and economies?”

Schools also provide a safe haven to children, protecting them from risks of abuse, exploitation and recruitment by armed groups. However, in numerous conflict zones around the globe, the number of children out of school is increasing dramatically.

According to UNICEF, at the primary school level, South Sudan has the highest rate of out-of-school children with close to 72 per cent of children missing out on education, followed by Chad (50 per cent) and Afghanistan (46 per cent).

These three countries also account for highest rate of girls who are out of school, at 76 per cent for South Sudan, Afghanistan (55 per cent) and Chad (53 per cent).

Similarly, at the lower-secondary level, the highest rates are in Niger (68 per cent), South Sudan (60 per cent) and the Central African Republic (55 per cent).

Out-of-school rates for girls spike for this age group: Nearly three quarters of girls in Niger and two in three in both Afghanistan and the Central African Republic are not in school.

VIDEO:According to the United Nations Children's Fund 22 per cent of children between 6 and 15 years old living in warzones are driven away from schools because of conflict and violence.

To help raise awareness on challenges that children affected and uprooted by conflict face in accessing school, UNICEF has been working with Muzoon Almellehan, a 19-year-old Syrian refugee and education activist.

Ms. Almellehan fled the violence in her home country about four years ago with her school books as her only belongings. 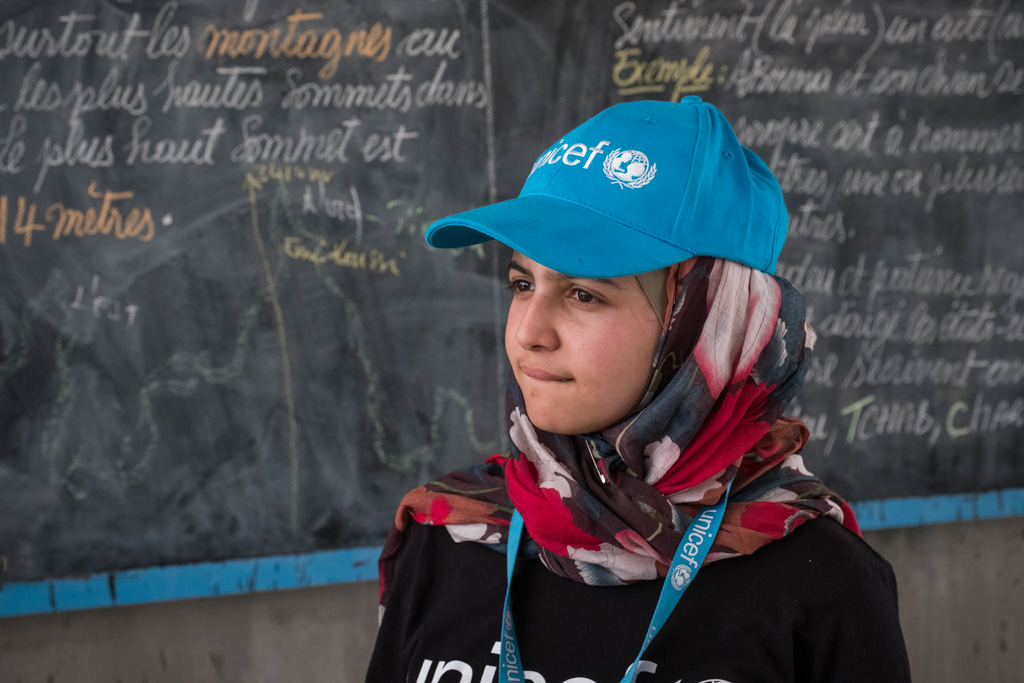 Syrian refugee and education activist Muzoon Almellehan visits a classroom at a school in Bol, Lake Region, Chad. There are 500 displaced children attending the school of 800 students and only eight teachers, causing strain on an already weak education system in Chad. Photo: UNICEF/Sokhin

She spent nearly three years in Jordan, including 18 months in Za'atari refugee camp, where she made it her personal mission to get more girls into education, said UNICEF, noting that she went from tent to tent talking to parents to encourage them to send their children to school. Dubbed 'the Malala of Syria', Ms. Almellehan has travelled to areas affected by conflict, including in Chad and in Nigeria and spoken to children facing these challenges.

Education gave me the strength to carry on. I wouldn't be here without it Muzoon Almellehan, a 19-year-old Syrian refugee and education activist

“Conflict can take away your friends, your family, your livelihood, your home. It can try to strip you of your dignity, identity, pride and hope. But it can never take away your knowledge,” said Ms. Almellehan.

“Meeting children in Chad who had fled Boko Haram reminded me of my own experiences in Syria. Education gave me the strength to carry on. I wouldn't be here without it.”

In its response to this grave crisis in conflict-affected countries, UNICEF is running programes to get children back to learning, providing catch-up education and informal learning opportunities, training teachers, rehabilitating schools and distributing school furniture and supplies.

In Chad, one of the worst hit by this 'education crisis', UNICEF has so far this year provided school supplies to more than 58,000 students, distributed teaching materials to more than 760 teachers, and built hundreds of classrooms, learning spaces, latrines and sports fields. It has also supported the salaries of some 327 teachers for the 2016-2017 school year.

However, despite these efforts, funding shortfalls are affecting its efforts and only 40 per cent of the UN agency's 2017 education funding needs in Chad have been met.

AUDIO: Visiting Chad with the UN Children’s Fund (UNICEF), Muzoon Almellehan, a 19-year-old refugee and activist dubbed the ‘Malala of Syria,’ heard first-hand how Boko Haram terrorists have disrupted education for a generation of young students.

♦ Receive daily updates directly in your inbox - Subscribe here to a topic.
♦ Download the UN News app for your iOS or Android devices.
war

Annan: instruments to protect civilians in wartime must be updated