A United Nations human rights expert has urged Cuba to consider introducing new legislation to ensure that everyone who falls victim to trafficking in persons can be identified and helped, and the authorities can take action against offenders.

“Although cases of trafficking in the country may appear to be limited, the number of criminal prosecutions and victims assisted is still too modest, and shows that a proactive approach to detection of the problem is needed,” said the UN Special Rapporteur on trafficking in persons, Maria Grazia Giammarinaro, wrapping up a five-day visit to Cuba.

Ms. Giammarinaro acknowledged the Government’s political will to address human trafficking and appreciated its strong aim on prevention, while underscoring that the protection of children from sexually motivated crimes should be extended to everyone under 18 years old.

“The focus of Cuba’s anti-trafficking action so far has been sexual exploitation. However, recent developments which have created new opportunities for individual initiatives in the tourist sector require vigilance to stamp out any cases of labour exploitation; the use of foreign workers in the construction industry should also be monitored” she stressed.

Based on a multi-disciplinary and coordinated approach to combat trafficking, Ms. Giammarinaro welcomed Cuba’s 2017-2020 Action Plan to prevent and fight against trafficking in persons and for protecting victims, which had been approved just before her visit – the first by a UN rights expert in 10 years.

“The real challenge will be the implementation of measures provided for in the document, especially aimed at identifying and supporting victims, while respecting their human rights” the Special Rapporteur said.

The UN expert praised Cuba’s universal and free systems for education, healthcare and social security, saying they helped to reduce the vulnerability of Cuban citizens to trafficking.

However, citing thousands who, in 2015, were exposed to trafficking and exploitation, she said that migration in unsafe conditions created situations that could lead to trafficking.

Ms. Giammarinaro spoke with a few of the survivors, who said that they had signed apparently legal contracts and been promised good working conditions abroad, “but, at their destination, their passports were confiscated, and they found themselves in the hands of gangs determined to exploit them for work without payment.”

“When efforts were made to force them into prostitution/sex work, the women managed to communicate with their families in Cuba and were rescued thanks to the immediate action of Cuban embassies. However, we don’t know how many young women may have been obliged to stay in exploitative situations abroad,” the expert said.

Ms. Giammarinaro called for the social stigma surrounding prostitution/sex work to be removed, and for the closure of so-called ‘rehabilitation centres’ where women are detained even though prostitution is not a crime.

“Any fear of being punished is a major obstacle for victims of trafficking for sexual exploitation to report their plight and the abuse they have suffered,” she stressed.

General Assembly calls for end to US embargo against Cuba 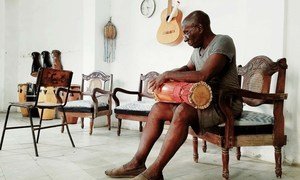