“[We have] observed record-breaking progress towards bringing ancient scourges like sleeping sickness and elephantiasis to their knees,” said Margaret Chan, the Director-General of the UN World Health Organization in a news release today on efforts to tackle the diseases, known as NTDs.

“Over the past 10 years, millions of people have been rescued from disability and poverty, thanks to one of the most effective global partnerships in modern public health.”

The UN agency’s new report, Integrating Neglected Tropical Diseases into Global Health and Development, shows how political support, improvements in living conditions and supply of medicines have led to sustained expansion of disease control programmes in countries where these diseases are most prevalent.

Another major milestone was the endorsement of a NTD roadmap in 2012, in which WHO partners committed additional support and resources to eliminating 10 of the most common NTDs.

VIDEO: Dirk Engels of the WHO says tackling Neglected Tropical Diseases can improve the living and economic conditions of people. Credit: UN News

For sustaining this momentum, experts believe that wider progress towards realizing the 2030 Agenda for Sustainable Development will be crucial.

Meeting global targets for water and sanitation, such as those under the global Sustainable Development Goals (SDGs) will be key.

WHO estimates that 2.4 billion people still lack basic sanitation facilities such as toilets and latrines, while more than 660 million continue to drink water from “unimproved” sources, such as surface water.

“Further gains […] will depend on wider progress towards the SDGs,” said Dirk Engels, Director of WHO’s Department of Control of Neglected Tropical Diseases.

Once widely prevalent, diseases are now restricted to tropical and sub-tropical regions with unsafe water, inadequate hygiene and sanitation, and poor housing conditions. More than 70 per cent of countries and territories that report the presence of NTDs are low or lower-middle income economies.

RELATED: Eradication of yaws – a disease that ‘begins where roads end’ – within sight, UN doctor says in film

Poor people living in remote, rural areas, urban slums, or conflict zones are most at risk.

♦ Receive daily updates directly in your inbox - Subscribe here to a topic.
♦ Download the UN News app for your iOS or Android devices.
Neglected Tropical Diseases 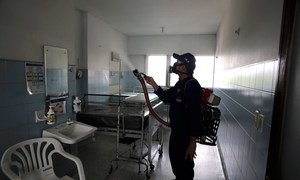 In addition to the impact on public health, the tangible impact of the Zika outbreak, such as on gross domestic product (GDP), could cost the Latin American and the Caribbean region as much as $18 billion between 2015 and 2017, a new United Nations report has revealed.