Logan Abassi/MINUSTAH
Residents fill their containers at a water capture and distribution project point in a town an hour outside of Port au Prince, Haiti.
17 April 2017

Historically, the people in the Madan Mak and Loncy areas of the Lascahobas Commune have always had serious problems with access to safe drinking water.

Situated in a mountainous region of Haiti’s Central Plateau, a few hundred kilometres from the capital Port-au-Prince, the two communities – up to just a few weeks ago – were among the 42 per cent of the country’s population still without access to safe drinking water in 2017.

When the cholera epidemic hit the Plateau Central, the need for safe potable water became crucial to eliminate the transmission of the disease.

“Before the water came here, we had to do a lot of work to find drinking water. We were forever obliged to go fetch water from Mont-Désir, which is miles away,” says Maria-Rose Joseph, a resident of Loncy. When she could not travel the distance, Ms. Joseph was obliged to use a source of unsafe water – despite the risks of transmission of water-borne diseases such as diarrhoea, dysentery, typhoid, and cholera.

The top United Nations humanitarian official in Haiti stressed that all efforts to ensure the provision of safe water and sanitation are crucial to eliminate cholera.

“Elimination of cholera can be achieved in the medium term – two or three years – if emphasis is placed on immediate action. That is to say an emphasis put on response capacity, management and immediate treatment of water. But nothing can be done without an investment in water, sanitation and hygiene,” explains El-Mostafa Benlamlih, the Deputy Special Representative of the Secretary-General and UN Humanitarian Coordinator for Haiti.

Elimination of cholera can be achieved in the medium term – two or three years – if emphasis is placed on immediate actionEl-Mostafa Benlamlih, Deputy Special Representative for Haiti

To address the concerns of those living in Mangoule, the Department of Artibonite proposed a new project to the UN peacekeeping mission in Haiti (MINUSTAH). “It was an essential project for the area because the residents had no drinking water. Other areas also have the same problem but, for now, we do not have the resources to carry out these other essential projects," said Fritson Jean-Baptiste, adviser to the Department of Artibonite.

“The entire Petit-Fond area benefits from safe water provision. Certainly, without the help of MINUSTAH the project would never have happened and that is why we want to thank all those involved,” he added.

The project involved the capture of water from the Mangoule spring, following which a sedimentation basin of 8 cubic metres was built. Then a 60-cubic-metre tank to store the water to supply the eight kiosks and three water points were constructed. The total cost of the project was $94,280 – of which $89,195 was financed by MINUSTAH.

Recently inaugurated in the presence of the local authorities and the MINUSTAH leadership, the project now makes it possible to meet the needs of more than 14,000 people by making access to drinking water easier.

“Our water needs are crystal clear and with the implementation of every successful new project, one can really see the change and improvement in the people’s living conditions,” says Lehon Johasse, Coordinator for Actions en Santé et en Développement d’Haïti, one of the local implementing agencies for this type of project.

For Mr. Benlamlih, investment in the water, sanitation and hygiene sectors must continue, and donor support is vital for this effort. “Haiti needs its partners and donors. It’s a collective effort – and the United Nations is there to help, coordinate, act and work with NGOs, work with national authorities and national institutions. We need donor support. That support is absolutely necessary.

“We must not relax our efforts,” he added. “There is no guarantee that cholera will not resume and surpass our capabilities. So we must not let go – and it is here that friends, partners and donors must continue to support and invest in this effort.”

Part of this particular initiative – the project to capture the Mangoule source – aims to help the Haitian authorities to improve public infrastructure and the living conditions of its population. As part of its new approach to tackle cholera, the UN wants to step up its support to the Haitian Government in the construction of drinking water, sanitation and health care systems, while developing a support package to provide material assistance to Haitians most directly affected by the disease.

Since 2010, the cholera epidemic has directly affected 805,000 people and taken the lives of more than 9,480 [official figures as of 11 March 2017]. The UN-backed national and international efforts led to a 90 per cent reduction in the number of suspected cases of cholera compared with the peak of the epidemic in 2011.

Under its new approach launched last year, the UN is intensifying support to the Haitian Government in building sound water, sanitation and health systems.

“I am so glad I can have water now. We need the water and before we had to set off at 4 a.m. to secure drinking water. I am so satisfied with this successful project that it is necessary to say it loud and clear. We had no water to wash, no water to drink – and the cholera came to take away our lives. Now we have water and we are delivered,” said Sonia Verville, a beneficiary of the project in Madan Mak. 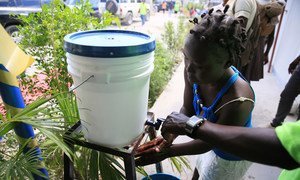 United Nations Secretary-General António Guterres has asked Member States to inform him by 6 March if they intend to make voluntary financial contributions to the implementation of the new UN plan to counter cholera in Haiti, his spokesman said today.