Young people from around the world today joined United Nations staff and international dignitaries in Changsha, China, to show support for protecting and preserving the cultural heritage along the Silk Route.

The future of our remaining heritage will depend largely on the decisions and actions of the present generation of young people who will soon become the leaders and decision-makers of tomorrow,?h the UN Educational, Scientific and Cultural Organization (UNESCO) said in a note about the week-long international youth forum.

About 80 men and women – aged between 18 and 30 – gathered at the official opening of the forum, organized by UNESCO around the theme of "Creativity and Heritage along the Silk Road." Today?fs event was held at the Yuelu Academy, which is now part of Hunan University but is believed to have been founded in 976.

UNESCO Director-General Irina Bokova was among the speakers who opened the forum, which seeks to raise awareness among youth about the need to preserve heritage and cultural locations, as well as to help to shape a scholarship and training programme aimed at young people.

According to UNESCO, each participant is from a country along the Silk Road, which once stretched from China through India to the Middle East and Europe.

In addition to carrying merchandise and commodities, the constant movement and mixing of populations along the Silk Route ?galso brought about the transmission of knowledge, ideas, cultures and beliefs, which had a profound impact on the history and civilizations of the Eurasian peoples,?h the Paris-based UN agency said.

The youth forum will travel later this week to Quanzhou, located at the south-east coast of China. A cultural heritage site, Quanzhou is also known for linking the ?gmaritime Silk Road?h which fanned out to nearly 100 countries and regions, according to UNESCO.

Ban urges young people to use their voices to build tolerance, understanding 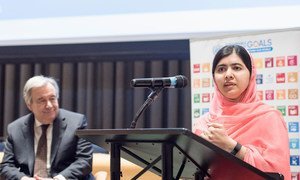 In 2012, Malala Yousafzai made headlines all over the world when she was shot by the Taliban for speaking out on the right of education for girls. But instead of silencing her, the brutal attack only served to embolden the Pakistani teenager, who has used her voice to promote the right of every child to safe, free and quality primary and secondary education.