<a href=http://bit.ly/2nsfErN>IRIN/Tom Westcott</a>
In Mosul, Iraq, aging family members are pushed for hours through frontline fighting between the army and the Islamic State of Iraq and the Levant (ISIL/Da’esh), to reach safety.
17 April 2017

Noting that nearly half a million people have fled Mosul since the start of military operations to retake the city from Islamic State of Iraq and the Levant (ISIL/Da'esh) terrorists, a senior United Nations humanitarian official in Iraq warned that the scale of the displacement has stretched relief efforts to their “operational limits”.

“Our worst case scenario when the fighting started was that up to one million civilians may flee Mosul. Already, more than 493,000 people have left, leaving almost everything behind,” Lise Grande, the Humanitarian Coordinator for Iraq, said in a news release issued by the UN Office for Coordination of Humanitarian Affairs (OCHA).

“The sheer volume of civilians still fleeing Mosul city is staggering […] we are doing everything we can but this has been a long battle and the assault on the old city hasn't started,” she added.

According to estimates, as many as 500,000 people still remain in ISIL-controlled areas in western Mosul, including about 400,000 in the densely populated old city.

Humanitarian agencies are scaling up their response, preparing emergency sites and camps to shelter the hundreds of thousands more who may flee in coming days and weeks, but they are under increasing strain.

'Nothing is more important than protecting civilians – nothing'

The battle for western Mosul is very different from the one in the east and so is the consequent impact on civilians. More trauma injures are reported and there are fears that food stocks and drinking water could run out.

“Civilians in Mosul face incredible, terrifying risks. They are being shot at, there are artillery barrages, families are running out of supplies, medicines are scarce and water is cut-off,” noted the UN humanitarian official.

The news release also underscored that all parties to the conflict are obliged, under International Humanitarian Law, to do everything possible to protect civilians, ensure they have the assistance they need, and limit damage to civilian infrastructure.

“Nothing is more important than protecting civilians – nothing,” stressed Ms. Grande. 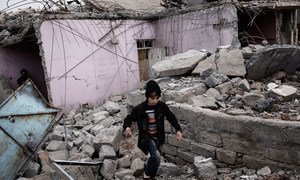 Using satellite imagery and local researches, the most recent evaluation confirms that western Mosul has undergone extensive destruction, “far greater than in the east,” according to a senior United Nations aid official in the country.