OCHA/Romenzi
A child standing amid debris on a street in Aleppo. (file)
16 April 2017

In a statement today, the UN Emergency Relief Coordinator, Stephen O'Brien, strongly condemned the violent act and reminded all parties to the conflict of their obligations under international law which expressly prohibits any harm on civilians.

“The perpetrators of such a monstrous and cowardly attack displayed a shameless disregard for human life,” said Mr. O'Brien.

“International humanitarian law is very clear: warring parties must protect civilians and distinguish between military and civilian targets,” he underscored.

In a separate statement today, UNICEF Executive Director Anthony Lake underscored that the attack must renew everyone's determination to reach all children throughout the war-ravaged country with support and relief.

“After six years of war and human carnage in Syria... six years of heartbreak for so many Syrian families... there comes a new horror that must break the heart of anyone who has one,” expressed Mr. Lake.

“A convoy of families who for so long had already known so much suffering […] now the survivors must bear such a new and terrible loss,” he noted.

According to reports, scores of people, including at least 60 children were killed in the devastating explosion that hit the convoy of buses in which some 5,000 people were evacuating from Foah and Kefraya to Government-controlled areas yesterday.

The explosion occurred as the buses passed Rasheedin in western Aleppo.

In the aftermath of the attack, humanitarian organizations, including the Syrian Arab Red Crescent (SARC) and UN partners, are providing assistance to the injured, including transferring them to hospitals.

The evacuation from the two besieged towns was a part of an agreement, popularly referred to as the “Four Towns” Agreement meant to facilitate humanitarian access to the people in need in those besieged towns. In addition to Foah and Kefraya in Idlib, the Agreement also includes Madaya and Zabadani in rural Damascus.

In his statement, Mr. O'Brien – also the UN Under-Secretary-General for Humanitarian Affairs – noted that while the Organization was not involved in the agreement or evacuation process, it stands ready to scale up its support to evacuees.

“In that regard, I call on all parties to the conflict to uphold their obligations under international humanitarian and human rights law, and to facilitate safe and unimpeded access for the UN and its partners to bring life-saving help to those in need,” he said. 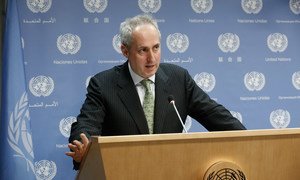 UN condemns attack on evacuees in Syria; underscores need to ensure safety of those trying to evacuate

Condemning today’s attack in Rasheedin, western Aleppo, Syria, on some 5,000 evacuees traveling from the besieged towns of Foah and Kefraya to Government-controlled areas, the United Nations has underlined the need to bring those responsible for the violent act to justice.