State of emergency should not overshadow rights protection, UN experts stress ahead of Turkey referendum

Ahead of this Sunday’s plebiscite on proposed constitutional amendments in Turkey that would, among other things, empower the President alone to declare states of emergency and determine the measures to be taken, a group of United Nations human rights experts have reiterated that even under such circumstances, protection of human rights must not be compromised.

In a news release today, the UN Special Rapporteurs on extreme poverty and human rights; the right to freedom of opinion and expression; the rights to freedom of peaceful assembly and of association; and the right to education also voiced concern over closure of some 200 media outlets in the country and said that the move not only caused thousands of journalists to lose their jobs and livelihoods, it also undermined the possibility of an informed debate over the referendum proposals.

Moreover, around 1,000 schools and 15 universities are estimated to have been closed by emergency decrees issued since July 2016, the release added.

Underlining that even under a state of emergency, economic, social and cultural rights can only be limited in ways that respect the basic rights themselves and are "solely for the purpose of promoting the general welfare in a democratic society," the experts said, adding that "there has been no attempt to show that these blanket measures, which have destroyed the careers and livelihoods of tens of thousands of persons, satisfy such criteria in each case.”

“The dismissal of up to 134,000 public servants, without due process, compensation, or access to a proper remedy, for alleged links with organizations that the Government has chosen to proscribe, cannot be justified by reference to Turkey’s longstanding international human rights obligations,” they added.

The experts also said that given the arbitrary and sweeping nature of the emergency decrees since July last year, “there is serious concern that such powers might be used in ways that exacerbate the existing major violations of economic, social and cultural rights.”

In the release, the UN Special Rapporteurs also noted that they are in contact with the Turkish Government over the issues. 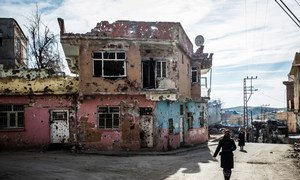