UN Photo/Marco Dormino
Members of a Formed Police Unit serving with the UN Stabilization Mission in Haiti (MINUSTAH) patrol a neighborhood in the capital, Port-au-Prince (2009).
13 April 2017

Recognizing the “major milestone” Haiti has achieved toward stabilization following recent elections, the Security Council today extended the mandate of the United Nations mission in the island nation for a final six-month period and authorized a smaller successor peacekeeping mission.

Unanimously adopting a new resolution, the Council decided that, after over 13 years operating in its current form, the UN Stabilization Mission, known by its French acronym, MINUSTAH, would gradually draw down its military component during the next six months, finally withdrawing from Haiti by 15 October 2017.

Acting on the recommendations of the Secretary-General, the Council also decided to establish a successor operation, the United Nations Mission for Justice Support in Haiti (MINUJUSTH), which would be mandated to assist the Haitian Government to strengthen rule of law institutions; further support and develop the National Police; and engage in human rights monitoring, reporting, and analysis.

Further to the resolution, MINUJUSTH would be composed of up to seven Formed Police Units – or 980 FPU personnel – and 295 Individual Police Officers for an initial period of six months from 16 October 2017 until 15 April 2018, and emphasized the importance of reaching those levels. The current Mission has just over 1,000 individual police and 11 police units.

The new Mission was also authorized to “protect civilians under imminent threat of physical violence, within its capabilities and areas of deployment, as needed.”

Briefing the Security Council early last week, MINUSTAH chief Sandra Honoré said Haiti had made significant progress in consolidating democracy and maintaining security and stability with the inauguration of Jovenel Moïse as President on 7 February, marking the restoration of constitutional order. Yet, in spite of these gains, pockets of fragility persisted and political challenges remained.

It is time, she said, to reshape the partnership among the international community, the United Nations and Haiti, with a view to monitoring concerns such as human rights issues and ensuring that progress made since MINUSTAH’s 2004 establishment endure.

With the Council’s support, said Ms. Honoré, the joint transition plan would guide the handover, underpinning the gradual transfer of tasks to the Government, the international presence and the United Nations Country Team, thereby allowing Haiti to seize the opportunity to “begin a new chapter in [its] history as the Mission transitions.” 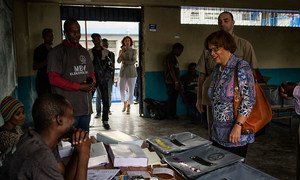 Highlighting improvements in Haiti’s political situation, including the recent elections and opportunities to address longstanding disputes, the senior United Nations official in the island nation has urged the international community to continue its partnership with Haiti and its people to help consolidate the gains achieved.