UNICEF/Tremeau
A girl carries her sister as another stands by her in the village of Mao in Chad.
12 April 2017

The use of children, particularly girls, by the Boko Haram terrorist group in violent attacks in the Lake Chad region has seen an “alarming” surge in 2017, the United Nations Children's Fund (UNICEF) has reported.

According to the UNICEF report, Silent Shame: Bringing out the voices of children caught in the Lake Chad crisis, 27 children have been used to carry out bomb attacks in public places across Nigeria, Chad, Niger and Cameroon in the first quarter of this year. During the same period last year, the number was nine.

“In the first three months of this year, the number of children used in bomb attacks is nearly the same as the whole of last year – this is the worst possible use of children in conflict,” the UNICEF Regional Director for West and Central Africa, Marie-Pierre Poirier, said in a news release announcing the grim findings.

“These children are victims, not perpetrators. Forcing or deceiving them into committing such horrific acts is reprehensible.”

Since 2014, 117 children – more than 80 per cent of them girls – have been used in 'suicide' attacks across the region. As a result of this distressing tactic, girls, boys and even infants have been viewed with increasing fear at markets and checkpoints, where they are thought to carry explosives.

The UNICEF report documents troubling accounts by children who were held in captivity by Boko Haram and narrates the deep suspicion they are met with when they return to their communities.

“Many children who have been associated with armed groups keep their experience secret because they fear the stigmatization and even violent reprisals from their community,” the report noted. “They bear their horrors in silent shame and endure isolation as they remove themselves from other groups for fear they might be outed and alienated even further.”

The report also highlights the challenges local authorities face with children who have been intercepted at checkpoints and taken into administrative custody for questioning and screening, including for prolonged periods.

Voicing concern over such custodies and that, last year, nearly 1,500 children were under administrative custody in the four countries, UNICEF has called on Governments to urgently transfer them to civilian authorities for reintegration and support, and to put in place handover protocols to handle children encountered during military operations.

“All children affected by the crisis need psychosocial support and safe spaces to recover,” said UNICEF, highlighting the particular need to pay attention to the care and protection of separated and unaccompanied children.

It also underlined that Boko Haram must end grave violations against children, including the recruitment and use of children in armed conflict as so-called “suicide bombers”.

At the same time, UNICEF continues to provide support to the children and families.

Last year, it reached more than 312,000 children with psychosocial support and reunited more than 800 children with their families in the four countries. It is also working with communities and families to fight stigma against survivors of sexual violence and to build a protective environment for former abducted children.

However, its response in the region remains severely underfunded. Last year, its $154 million appeal was only 40 per cent funded. 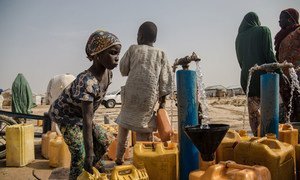