UN calls for urgent access to reach some 400,000 civilians trapped in Syria’s Ghouta

Voicing concern over the impact of deteriorating security and humanitarian situation on the lives some 400,000 people trapped in eastern Ghouta in Syria, a United Nations spokesperson today underlined the need to ensure that humanitarians have unrestricted access to the affected areas.

“There have been continued reports of heavy aerial bombardment and artillery shelling which have resulted in civilian deaths and injuries,” Stéphane Dujarric, the Spokesman for the Secretary-General, told the regular daily briefing at UN Headquarters in New York.

According to reports, Government forces have prevented commercial trucks from entering the town, located in rural Damascus, since late March.

Lack of supplies have resulted in price hikes of basic staples and closures of many bakeries due to lack of flour and much higher prices for fuel and gas.

“It is critical that the UN and partners be given access to the area before the conditions deteriorate further,” Mr. Dujarric underscored.

The last UN humanitarian delivery to any of the besieged areas of eastern Ghouta was nearly six months ago, in October last year, with other areas not having been accessed since last June.

“We also remind all parties of their obligation to protect civilians and civilian infrastructure as required by international humanitarian and human rights law,” said the UN spokesperson.

Last week, Jan Egeland, UN Senior Adviser on Syria had also underlined the plight of the civilians trapped in the town and called for an urgent ceasefire to enable safe delivery of desperately needed relief and medical supplies.

He had also stressed that special arrangements needed to be made for hospitals and that medical facilities must not be targets for attack and urged that a “notification system” be established to ensure the safety of medical premises.

“We cannot have a situation where armed actors do not, cannot or will not guarantee that medical facilities will not be attacked,” said Mr. Egeland, adding: 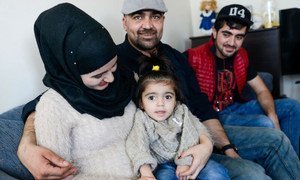 The world’s attention has moved away from Syria following the battle for Aleppo, despite the fact that the last few months have been “some of the worst” for civilians, the United Nations humanitarian chief today told the Security Council, reiterating calls for an end to the six year conflict.