In 2012, Malala Yousafzai made headlines all over the world when she was shot by the Taliban for speaking out on the right of education for girls. But instead of silencing her, the brutal attack only served to embolden the Pakistani teenager, who has used her voice to promote the right of every child to safe, free and quality primary and secondary education.

Malala has received numerous accolades in recent years, including the United Nations Human Rights Prize and the European Parliament's Sakharov Prize for Freedom of Thought. In 2014, at the age of 17, she became the youngest person ever to be awarded the Nobel Peace Prize.

The student activist is taking on a new role, with Secretary-General António Guterres having designated her as the UN's youngest Messenger of Peace, with a focus on girls' education. She sat down for an interview with UN News following her designation at UN Headquarters on 10 April to discuss what her new role means to her, what her advocacy efforts have taught her and what she thinks are some of the misconceptions people have about her.

UN News: UN Messenger of Peace is an impressive title. How do you see yourself in this role?

Malala Yousafzai: I'm really honoured to be given this title of Messenger of Peace, and to me it is more responsibility, which I have already had, which I was already taking, for girls' education ­­– raising awareness, asking world leaders to invest more in education. And I will continue to do that. But UN Messenger of Peace, this has given me even more strength and it will keep me strong and also will give me a bigger platform with which I can spread my voice for education.

UN News: And speaking of being an advocate for girls' education, what has been the biggest lesson that you've learnt in the years you've been advocating and been a role model for this issue?

If we want to make our lives better, we have to invest in girls’ education.

Malala Yousafzai: I've been fighting for girls' education since I was 10 or 11, when in Swat Valley, in Pakistan, terrorism started and girls couldn't go to school. And I have learnt so much in my 20 years of life – from seeing terrorism, extremism, to then being attacked at the age of 15 and now at the global stage fighting for girls' education.  And what I have learned is that the future generation, they need education, they need quality education. And if we want to see our future bright, developed, if we want to make our lives better, we have to invest in girls' education. That is crucial. We cannot ignore it. And I just sometimes wonder, why have our world leaders ignored it for so long? The thing that I have realised from my experience in 19 years, they haven't learnt yet in their 50, 60+ years. So that is my message, to make sure that they realise that their investment in education can change the whole world.

UN News: Your father is here with you today and he was very instrumental in seeing that you went to school. What can men and boys do to ensure that girls and women get an education?

Malala Yousafzai: I started speaking out but I wouldn't have been able to go forward and speak out without my father, without my parents. There were so many other girls who also wanted to speak out but their parents, their brothers, did not allow them. So that is the role of men that is crucial at this stage because if men stop women from speaking out, women aren't able to go forward. So it is important for men to allow women to follow their dreams, to achieve their dreams. As my father said, you don't need to do something extra for women – just don't clip their wings, and let them fly. Let them go forward. So men need to come forward, be proud feminists, stand up for women, and when you empower women, when you help women, you empower the whole society. There are economic benefits, there are social benefits…the benefits you see are countless.

UN News: You've been advocating for years about girls' education and your accomplishments are incredible: Nobel Laureate and now UN Messenger of Peace.  Everybody knows your story and I think people feel like they 'know' you. But as you mentioned, you're still 19. What do you think is one of the misconceptions that people have about you?

Malala Yousafzai: Often people think that I'm quite big but I'm actually very, very short and I'm very small, like only five-foot something, and then I wear high heels to make myself taller but it still doesn't work. So I'm very short. And the second thing is that people often think that I would be, I don't know, very good at studies and things like that but they don't know that I also go through difficult times in my school. I have exams; I also get C's and D's; I also have to work hard for my college. I'm not given admission free of any tests or anything. I had to go through tests. I had to get three A's in my final exams to go into university. So, I'm going through the same things that all students go through. So, I'm quite normal. Nobel Peace Prize and Messenger of Peace – these things don't really help you much. 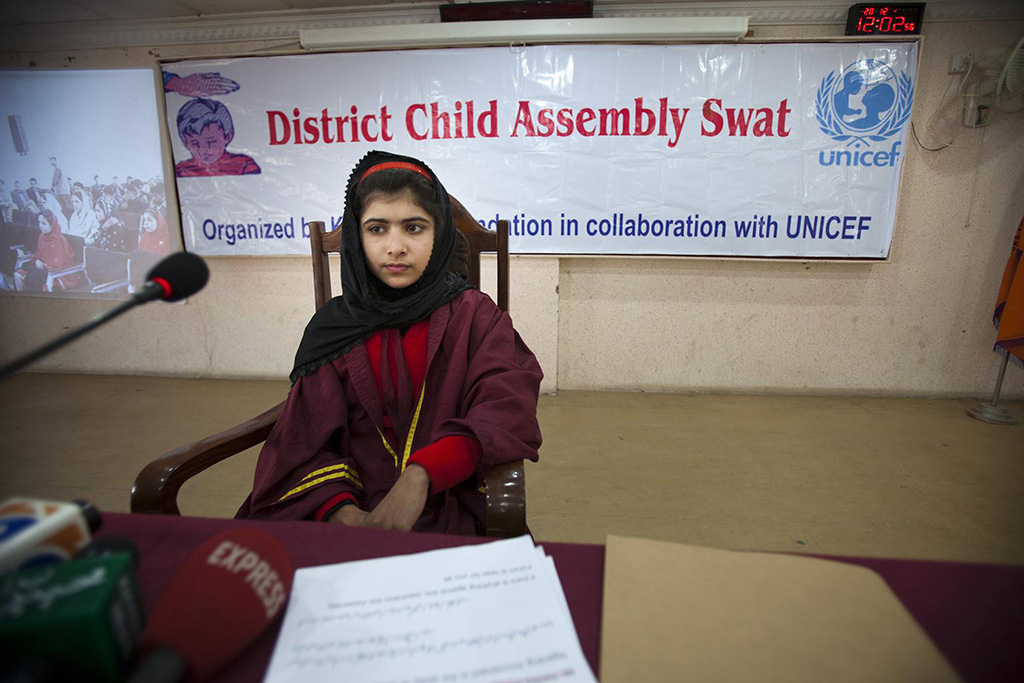 In 2010, at the age of 13, Malala chairs a session of the UNICEF-supported Child Assembly, that was held at the Khpal Kor Model School and Orphanage, in the city of Mingora, Pakistan. Photo: UNICEF/Ahmed 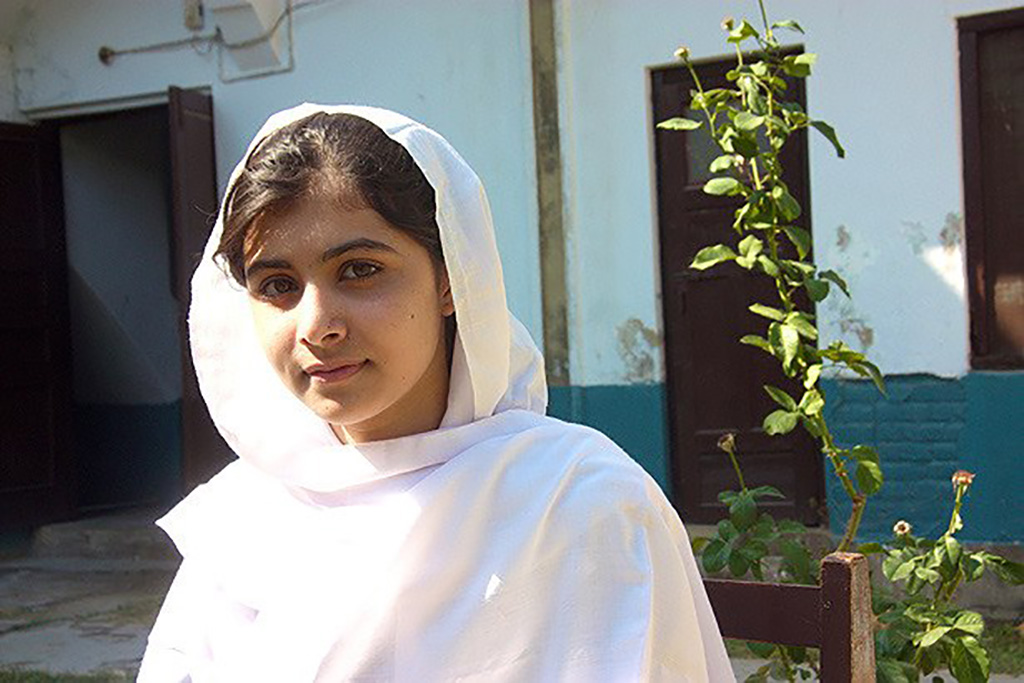 Two years later, the courageous campaigner for girls' education was shot by the Taliban while on a bus heading home after school. UNICEF reported that Malala kept a diary for the BBC, documenting how the Taliban took over her town and closed all girls' schools three years prior. Photo: Facebook/UNICEF Pakistan 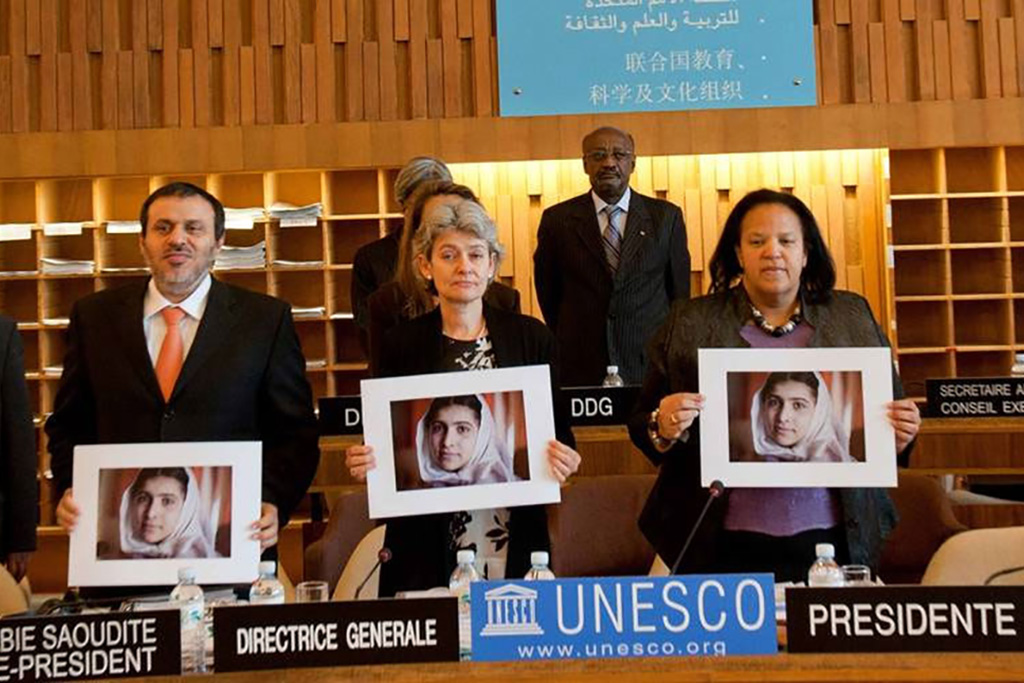 A month after Malala was shot UNESCO Director-General Irina Bokova co-hosted a high-level advocacy event in Paris called “Stand up for Malala – Stand up for girls’ right to education.” The event, which coincided with Human Rights Day, was designed to generate political will and accelerate action in favour of every girl’s right to go to school. UNESCO/Landry Rukingamubiri 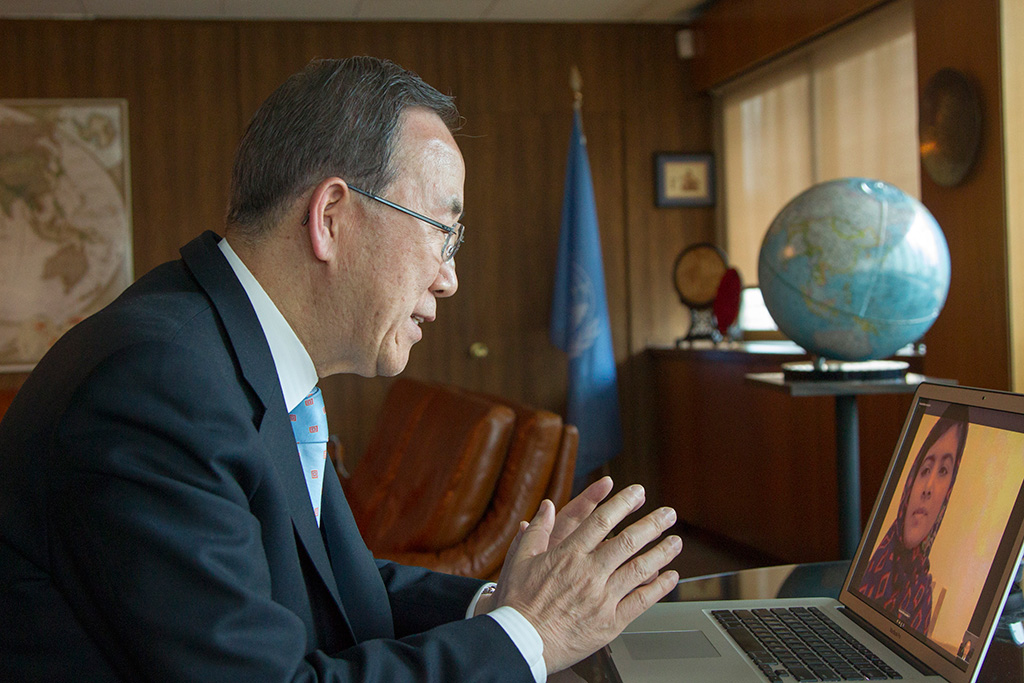 While still recovering from the attack on her life, Malala told then Secretary-General Ban Ki-moon “I can walk. I can talk. I can do anything!” In return he said that she is “a symbol of hope, a daughter of the United Nations. The UN will always be with you and the many people like you.” Photo: UN Photo/Rick Bajornas 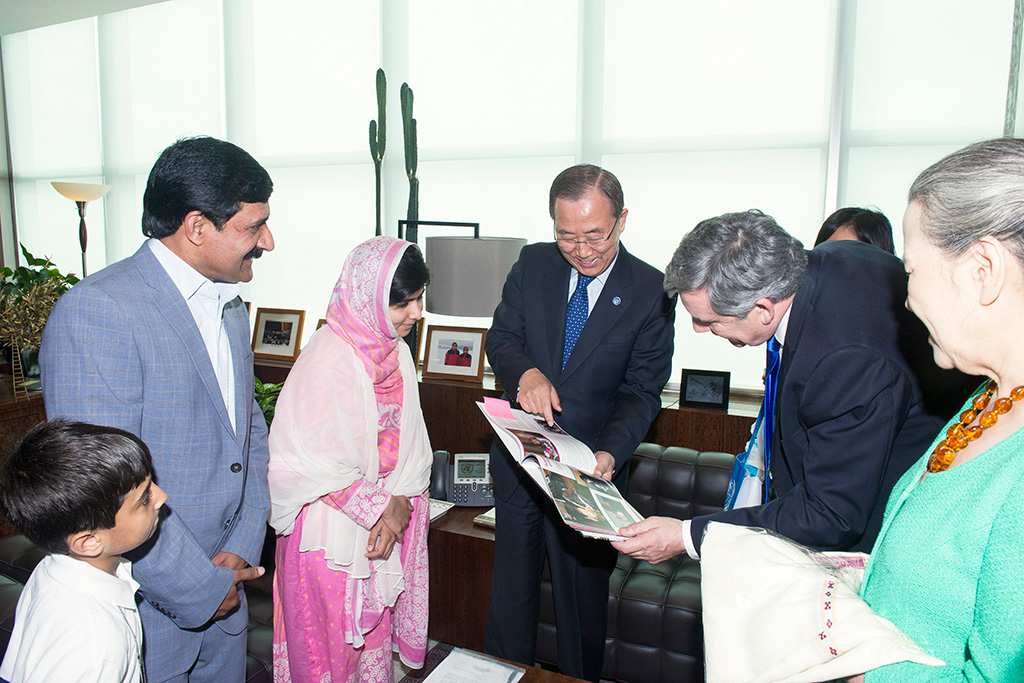 On 12 July, 2013, her sixteenth birthday, Malala addressed hundreds of young people at the UN, urging them to use education to fight extremism. “Let us pick up our books and our pens. They are our most powerful weapons. One teacher, one book, one pen, can change the world,” she said. Also pictured are her father and younger brother. Photo: UN Photo/Eskinder Debebe 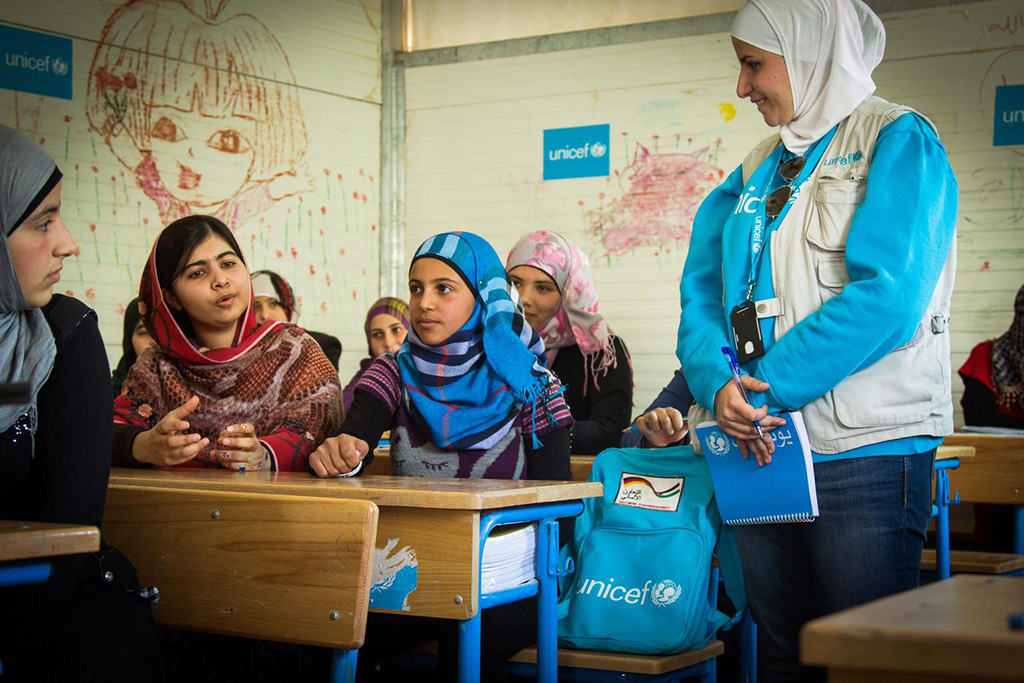 During a visit to School No. 2 in the Za’atari camp for Syrian refugees in Jordan, Malala speaks with Mozoun, a peer educator and student. Mozoun advocates for education in the camp, going from household to household to encourage families to send their children to school. Photo: UNICEF/El Ouerchefani 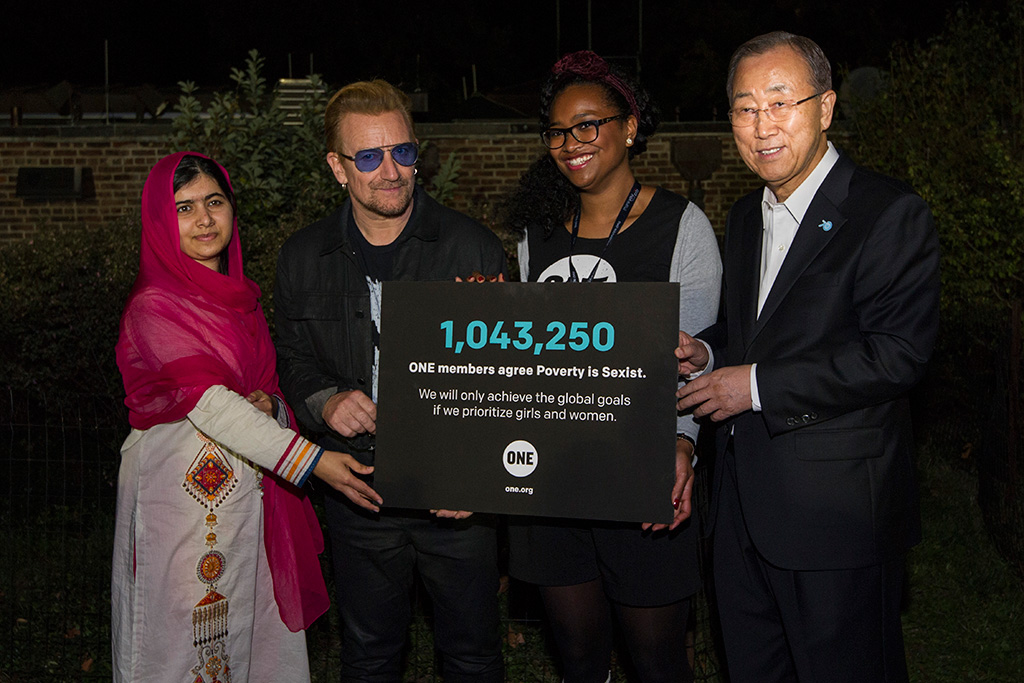 Malala addressed the 2015 Global Citizen Festival in New York City, which took place on the margins of the UN Sustainable Development Summit at which world leaders adopted an ambitious new plan to end poverty and promote prosperity by 2030. Malala is pictured here with then Secretary-General Ban Ki-moon (right) and musician and activist Bono (second from left) of the band U2. Photo: UN Photo/Eskinder Debebe 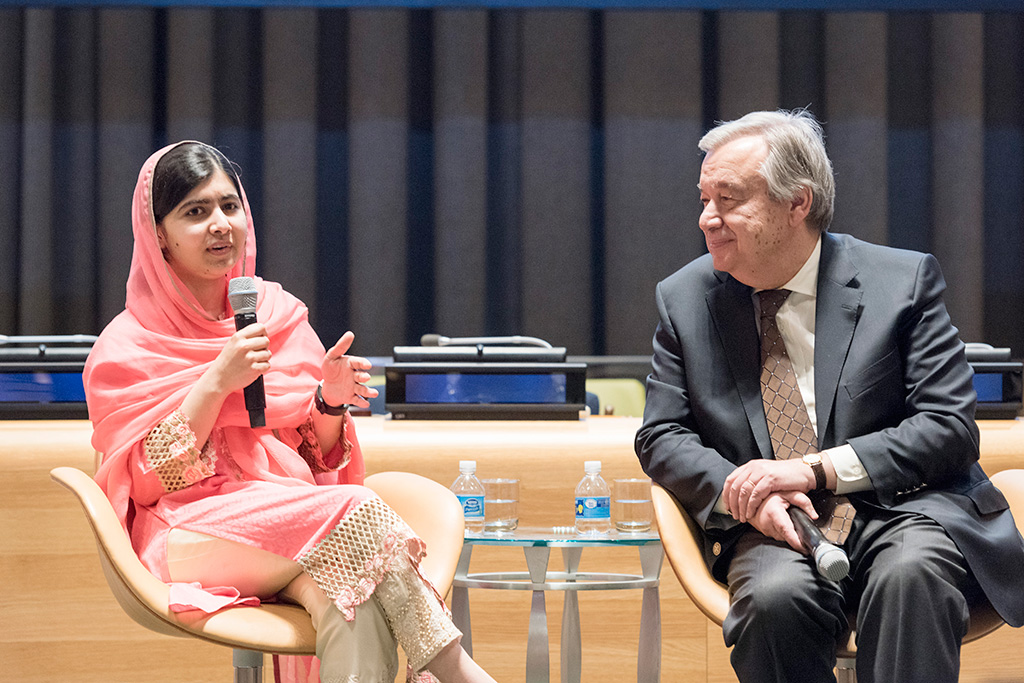 Following her designation on 10 April 2017 as the UN’s youngest Messenger of Peace, Malala and Secretary-General António Guterres engaged in a conversation with hundreds of youth representatives from around the world on the theme of girls’ education. Photo: UN Photo/Rick Bajornas

UN News: Speaking of education, you mention that you have to study just like everybody else.  What's next with regard to your own education?

Malala Yousafzai: At university level, or as you call it 'college' in America, I want to study PPE which is Philosophy, Politics and Economics. And I have applied to a few universities but it all depends on my final grades which will come in August which university I will go to. And I'm just working hard on that. And then after that, I'm not sure what kind of career I want to go for. One thing I'm very sure about is that I will stay focused on girls' education. Through the Malala Fund, I will continue to focus on girls' secondary education and inspire more young girls like me to speak out and stand with me so we can amplify the voices of young girls.

UN News: As you travel the world in your new role as UN Messenger of Peace, how will you go about inspiring young people, particularly those in areas where they feel they have no hope, that there's no point in going to school?

Your voice is important; your voice can change the world

Malala Yousafzai: I visited many countries like Lebanon and Jordan. I have met Syrian refugee girls; I met girls in Nigeria. I will continue to do that through this role of Messenger of Peace and I will visit different countries, meet amazing and inspiring girls throughout the world, and make sure that I tell them that your voice is important; your voice can change the world. And I spoke out in Swat Valley and you can see how a child's voice was more powerful than the terrorists' guns. And that is what they need to realize, all children, that your voice is important for our world. And you don't need to grow up to bring change; you can bring change now.

Malala Yousafzai: I will just say that believe in yourself, stay confident, stay hopeful about the future. There will be bad things happening but if we are united, if we stay together, we will be stronger, we can make our world better, we can bring change, so let's stay positive and hopeful.

Attacks on education during times of conflict must stop: UN chief