“You have been to the most difficult places […] visited several refugee camps. Your foundation has schools in Lebanon, in the Beka’a Valley,” said Mr. Guterres at a ceremony in the Trusteeship Council chamber at UN Headquarters, in New York.

“[You are a] symbol of perhaps the most important thing in the world, education for all,” he highlighted.

Ms. Yousafzai, who was shot in 2012 by the Taliban for attending classes, is the youngest-ever UN Messenger of Peace and the first one to be designated by Secretary-General Guterres since he assumed office in January this year.

Accepting the accolade, Ms. Yousafzai underscored the importance of education, especially education of girls, for advancing communities and societies.

“[Bringing change] starts with us and it should start now,” she said, adding: “If you want to see your future bright, you have to start working now [and] not wait for anyone else.”

UN Messengers of Peace are distinguished individuals, carefully selected from the fields of art, literature, science, entertainment, sports or other fields of public life, who have agreed to help focus worldwide attention on the work of the global Organization.

Backed by the highest honour bestowed by the Secretary-General on a global citizen, these prominent personalities volunteer their time, talent and passion to raise awareness of UN’s efforts to improve the lives of billions of people everywhere. 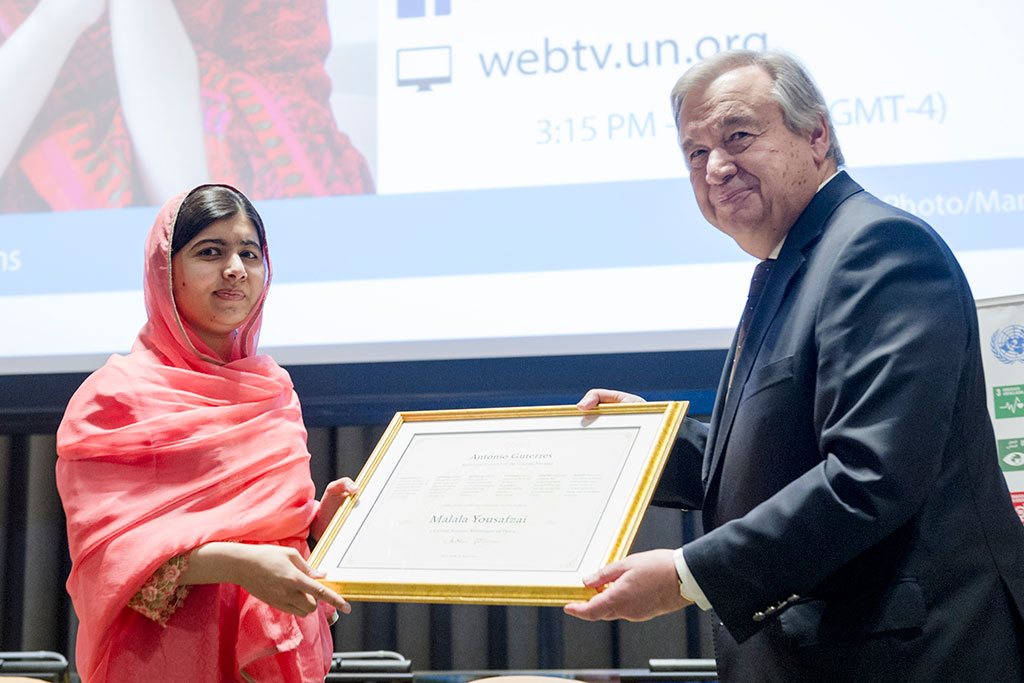 Malala Yousafzai, global advocate for girls’ education and the youngest-ever Nobel Peace Prize laureate, was designated as a United Nations Messenger of Peace with a special focus on girls’ education, at a special ceremony at UN headquarters. UN Photo/Rick Bajornas 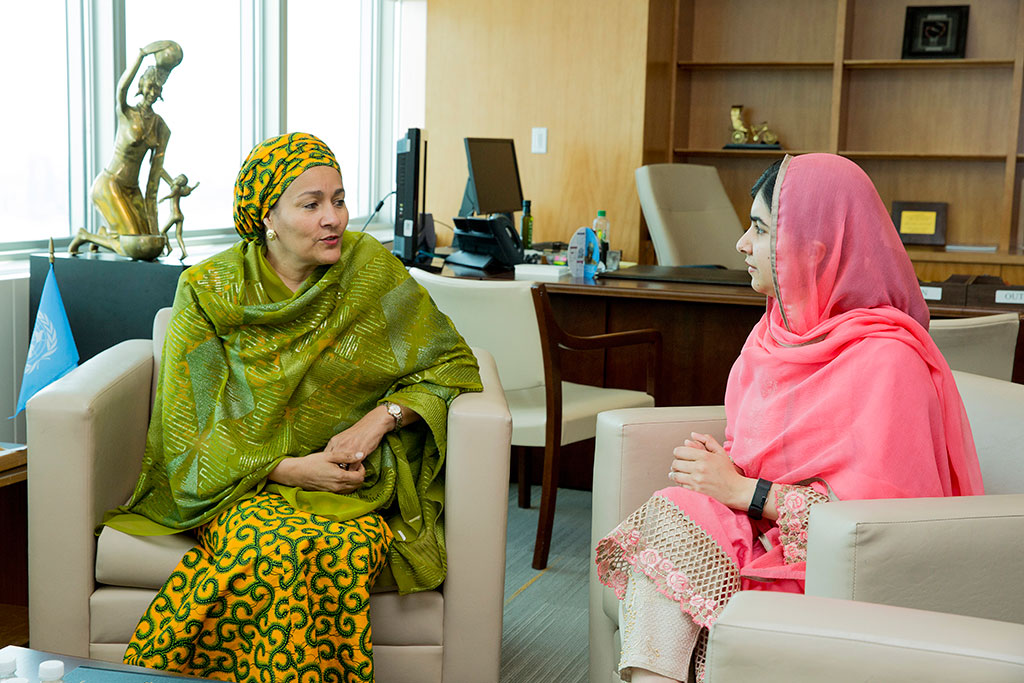 Deputy Secretary-General Amina J. Mohammed pictured together with children’s rights activist and Nobel Laureate Malala Yousafzai on on the day Malala was designated as UN Messenger of Peace with a special focus on girls’ education. UN Photo/Evan Schneider

If you speak out, you can help people – UN Messenger of Peace Malala

Following the official presentation, Secretary-General Guterres and Ms. Yousafzai conversed with youth representatives from around the world on the theme of girls’ education.

Taking a question from a young speaker in the audience, Ms. Yousafzai said the most difficult time she faced had been from 2007 to 2009 in the Swat Valley, “because we were at a point of making a decision about whether to speak out or remain silent. And I realized that if you remain silent, you are still going to be terrorized. So speaking out, you can help people.”

While recovering from the Taliban attack, she realized that “extremists tried everything to stop me [and the fact that they didn’t] is clear evidence that no one can stop me. I have second life for the purpose of [pressing for] education and I’ll continue working on [this issue].

VIDEO Explainer: What does it mean to become a Messenger of Peace

Ms. Yousafazi went on to say that brothers and fathers must also support women and girls in the global effort to ensure education for all and, more importantly, to “be who they want to be.” Indeed, she said that her father always told people not to ask him what he did for Malala, ‘but ask what I didn’t do – I didn’t clip her wings.’

Summing up the conversation, Mr. Guterrers called Ms. Yousafzai’s life “a remarkable example of solidarity.” Yet, he said, Pakistan is also such an example. “We live in a world where so many borders are closed; so many doors are closed, but Pakistan has received seven million refugees with open borders, open doors and hearts – a symbol of generosity.”

He hoped this spirit could serve as an example that “it is not by closing doors that we will all be able to move forward.”

Speaking at the United Nations General Assembly alongside 193 youth representatives from the Organization’s 193 Member States, Pakistani education advocate Malala Yousafzai today asked world leaders to promise that every child will have the right to safe, free and quality primary and secondary education.