UNMISS/UN Military
Following the recent upsurge in fighting in Melut, Upper Nile State, South Sudan, UN peacekeepers are protecting displaced civilians on its base and in this area adjacent to the compound.
8 April 2017

Following recent attacks on civilians and aid workers in South Sudan, the top United Nations humanitarian official in the country today called on the Government and the opposition to protect civilians and ensure the safety and security of humanitarians.

Noting reports this week of “outrageous abuses” by both state and opposition actors in Upper Nile against aid workers, as well as reports of horrific attacks against civilians in Eastern Equatoria, Eugene Owusu, called the attacks “reprehensible and unacceptable.”

“I call on those in power to take swift action to end the targeting of innocent people in this conflict and to hold those responsible to account,” the UN Humanitarian Coordinator in South Sudan said.

In his statement, Mr. Owusu noted two “serious” attacks against aid workers in Aburoc and Melut, both in the Upper Nile, since 31 March.

He condemned the attacks “in the strongest terms,” and demanded authorities to investigate and bring the perpetrators to justice.

“Humanitarians are in this country to save lives. It is beyond reckoning that they continue to be killed, harassed and abused despite our repeated calls for action,” Mr. Owusu stressed.

Also this week, in Pajok, Magwi County, Eastern Equatoria, at least 6,000 people have been forced to flee to Uganda and reportedly several dozen have been killed, following an attack by government forces on the town.

The Office for the Coordination of Humanitarian Affairs (OCHA) said that thousands more are thought to be sheltering in the bushes in areas surrounding the town, which was estimated to be home to up to 50,000 people.

“I am appalled by the reports,” said Mr. Owusu. “I implore the leadership in South Sudan to rapidly investigate these allegations and to end all attacks against civilians.”

The attacks come as the humanitarian situation in South Sudan is deteriorating. More than 3.5 million people have been forced to flee their homes, including nearly 1.9 million people who are internally displaced and more than 1.7 million who have fled as refugees to neighbouring countries.

OCHA estimates that an average of 2,000 South Sudanese refugees are arriving into Uganda each day, some 62 per cent of them children. 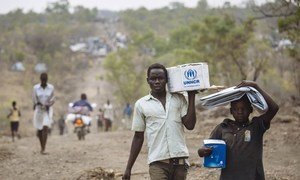 Host communities and aid agencies in Uganda are struggling to feed and shelter new refugees who have been displaced following a spike in violence in parts of neighbouring South Sudan's Eastern Equatoria province, the United Nations refugee agency said today.