IOM Colombia
An IOM official with Colombian authorities at a camp for those displaced by landslides in Mocoa.
7 April 2017

Responding to the devastating landslides in Colombia's Mocoa municipality that have claimed at least 300 lives, left more than 370 missing, and destroyed hospitals and infrastructure, United Nations relief agencies have stepped up their response to alleviate humanitarian suffering among the affected people.

“[We] know the emergency area and are supporting the Colombian Government, which established a unified response centre in the municipality to coordinate national and international support,” Alejandro Guidi, the head of UN International Organization for Migration (IOM) operations in the country said in a news release today.

Other UN entities in the country are also working under various 'clusters':

The Office of the UN High Commissioner for Refugees (UNHCR) is chairing the local coordination team of humanitarian agencies and is leading a rapid emergency assessment; the UN Children's Fund (UNICEF) is leading the water, sanitation and hygiene (WASH) and education in emergencies clusters; the Food and Agriculture Organization (FAO) is leading the food security and nutrition clusters; and the World Health Organization (WHO), working with the Colombian Ministry of Health, is leading the health cluster.

Such 'clusters' are activated in the aftermath of a disaster and are an essential part of the humanitarian response. They help coordinate the work of numerous UN and non-UN agencies, prevent gaps and avoid duplication.

However, the situation on the ground in Mocoa and other affected areas remains challenging.

There is a lack of drinking water, the sewer system and the hospital network have been damaged, and the electricity supply in some municipalities of Putumayo province have been disrupted.

There is also little information on the situation in rural areas and lack of funding is hampering relief efforts.

According to Joel Millman, an IOM spokesperson, at its headquarters in Geneva, “private sector had stepped up strongly”, with one telecommunications company, providing the UN migration agency with communication equipment and broadband connectivity to help with its registration efforts.

However, with an estimated funding gap of nearly 60 per cent, more is needed. 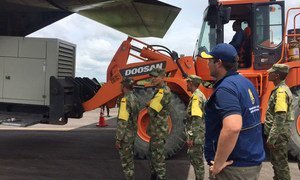 Very heavy rainfall triggered the landslides that hit Colombia over the weekend, but “exceptional” level of rains were not the sole cause, the United Nations weather agency said today, noting that many other factors, such as loss of forest cover, added to the devastation.