Dr. Raphael Lemkin, who coined the word ‘Genocide.’ The Convention on Genocide was drafted by the United Nations to prevent and punish the crime of genocide – the mass destruction of national, ethnical, racial or religious groups as such. UN File Photo
6 April 2017

Raphael Lemkin is hardly a household name now, but before the Second World War, he became the driving force behind what would become, in 1948, the UN Convention on the Prevention and Punishment of the Crime of Genocide.

Raphael Lemkin is hardly a household name now, but before the Second World War, he became the driving force behind what would become, in 1948, the UN Convention on the Prevention and Punishment of the Crime of Genocide.

UN News has reached into the audio programme archives, to revive a highly-produced 1958 profile on Mr. Lemkin, and his work at the United Nations and beyond, as part of our podcast series, The Lid is On.

An American of Polish-Jewish descent, Mr. Lemkin coined the term genocide, after dedicating his life at an early age, to pursuing the international legal means to end the mass extermination of peoples.

He narrowly escaped death at the hands of the Nazis in 1939 before managing to flee to safety, but lost 49 relatives during the genocide of the Holocaust.

As early as 1933, he was working to introduce an international law recognizing the “crime of barbarity,” in a presentation to the Legal Council of the UN's forerunner, the League of Nations.

He drafted the resolution that would eventually become the Genocide Convention in the early years of the UN, after 1945, and with the support of the United States, it went to the UN General Assembly for consideration, and finally, adoption.

Genocide has not of course, been consigned to the history books, and on April 7, the International Day of Reflection on the Genocide in Rwanda, is marked each year, which was the day that the killings – which would eventually result in the deaths of more than 800,000 in the small African nation – first began, in 1994.

In his message to mark the day, UN Secretary-General António Guterres has said that “the world must always be alert to the warning signs of genocide and act quickly and early against the threat.”

“Even today, minorities and other groups suffer attacks and exploitation based on who they are,” he adds.

AUDIO: Raphael Lemkin is hardly a household name these days, but back in the 1940s he became the driving force behind what would become The Convention on the Prevention and Punishment of the Crime of Genocide. 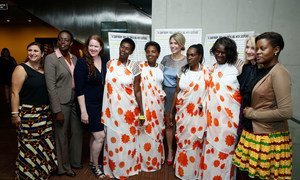 Shame and stigma prevent many rape survivors in conflict zones from reporting the abuses they endure at the hands of war criminals whose sole aim in carrying out these horrific deeds is to torture and humiliate their enemy.