In addition to the impact on public health, the tangible impact of the Zika outbreak, such as on gross domestic product (GDP), could cost the Latin American and the Caribbean region as much as $18 billion between 2015 and 2017, a new United Nations report has revealed.

The report Socio-economic impact assessment of Zika virus in Latin America and the Caribbean, prepared by the UN Development Programme (UNDP) in partnership with the International Federation of Red Cross and Red Crescent Societies (IFRC), has a particular focus on Brazil, Colombia and Suriname – countries that first reported the outbreak in October-November 2015.

Highlighting the far-reaching impact of Zika virus would go beyond tangible losses such as to the GDP and could potentially impact the implementation of the 2030 Agenda for Sustainable Development, Jessica Faieta, the UNDP Assistant Administrator and Director of its Regional Bureau for Latin America and the Caribbean, said:

“The consequences of the virus can undermine decades of social development, hard-earned health gains and slow progress towards [achieving] the Sustainable Development Goals (SDGs).”

The assessment also clearly showed that the impact of the virus was felt the most in poorer countries.

While larger economies such as Brazil could bear the greatest “absolute” burden, but the most “severe” impacts are likely be felt in the poorest countries such as Haiti.

“Zika reminds us that all countries and peoples remain vulnerable to emerging infectious diseases, and that a disease that primarily affects poorer populations has wide-ranging social and economic implications for entire communities,” added Magdy Martínez-Solimán, the UNDP Assistant Administrator and Director of its Bureau for Policy and Programme Support.

The impact assessment also highlighted the need to strengthen regional and national preparedness and response strategies which also involve communities and have particular focus on the needs of vulnerable group such as girls, women and persons with disabilities.

“We must continue to promote coordination at all levels and strengthen the Red Cross' role as an auxiliary to public authorities.” 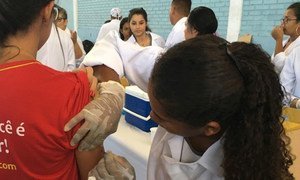 In response to the yellow fever outbreak on-going in Brazil, some 3.5 million doses of vaccine from the emergency stockpile were deployed to the country through a United Nations-backed coordination mechanism, according to the World Health Organization (WHO).