UNICEF/Tremeau
Mother and child, in a refugee camp in Chad’s Lac Region. The Department which deals with tackling sexual explotation mentioned it will work closely with Member States to conduct DNA tests to establish paternity and ensure recognition of the rights of mother and child.
6 April 2017

Following his analysis of the report of the High-Level External Independent Review Panel on Sexual Exploitation and Abuse by International Peacekeeping Forces in the Central African Republic, former United Nations Secretary-General Ban Ki-moon appointed Jane Holl Lute of the United States as Special Coordinator on improving the Organization’s response to sexual exploitation and abuse, in February 2016.

“The Secretary-General – even before formally taking office – made it very clear that he intends to be associated personally and continuously with all efforts to rid this Organization of this scourge,” said Ms. Lute, in an interview with UN News a few days before the publication of the Secretary-General’s report, Special Measures for Protection from Sexual Exploitation and Abuse: A New Approach.

In the interview, Ms. Lute, echoes Secretary-General Guterres’ concern that “deep gender inequality is at the heart of what sexual exploitation and abuse is.”

"We have to do better and we have to do more”, stresses Ms. Lute, as she describes a new, four-fold UN strategy to tackle sexual exploitation and abuse.

In an effort to put victims first, Secretary-General Guterres announced that he intends to appoint a victims’ rights advocate at  UN Headquarters, while calling on each of the four UN field missions that account for the highest numbers of incidents to appoint one on the ground as well.

The four peacekeeping missions are located in the Central African Republic, Haiti, the Democratic Republic of the Congo, and South Sudan.

Atul Khare, head of the UN Department of Field Support – which deals with tackling sexual exploitation and abuse in UN peace operations – explains in a separate interview that measures are being taken in close cooperation with Member States to address this scourge in the field and provide essential assistance to victims. For example, immediate and urgent needs are covered by each  mission’s budget, while the Department is working closely with Member States to conduct DNA tests to establish paternity and ensure recognition of the rights of mother and child.

Also, a trust fund to assist victims has been established in which  Member States voluntarily contribute to improve the medical and psychosocial assistance provided to victims in coordination with UN humanitarian agencies and non-governmental organizations (NGOs).

VIDEO: Atul Khare pledges to eliminate the scourge of sexual exploitation and abuse, including acts committed by peacekeeping forces under the UN mandate. Credit: UN News

Preventive measures include mandatory training, sensitization, risk management and enhanced screening of all incoming personnel – be it military, police or civilian – for prior misconduct while serving with the UN. Response measures include deployment of immediate response teams to gather and preserve evidence, rapid investigations, immediate disciplinary measures such as  repatriation of uniformed personnel when the perpetrator is known and suspension of payments, and pursuing criminal accountability with Member States, including imprisonment.

For Mr. Khare, the wrongdoings of some people should not tarnish the sacrifice of the more than 100,000 peacekeeping personnel, and their respective countries. “Protectors cannot be predators. Protectors cannot be somebody who is exploiting the people,” he says.

While greater collaboration has been provided by Member States, collective work is also undertaken in the sensitization of communities living close to UN bases, including through messages broadcast by UN radio stations on the ground.

More data on victims, allegations, investigations and accountability measures is also being provided through the recently redesigned Conduct and Discipline website.

As a part of educational efforts, No Excuse Cards have been produced for UN system-wide use, which are to be carried by all UN personnel, including humanitarian and peacekeeping personnel, in the field. 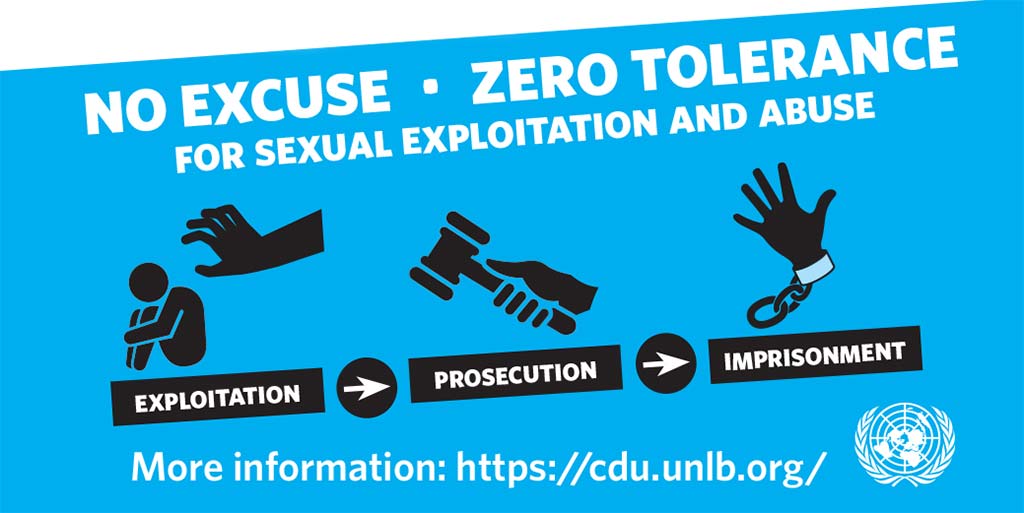 No Excuse Cards (pdf) produced for the UN system.

An issue to be addressed across the Organization

Relating to the methodology of the response to sexual exploitation and abuse, Ms. Lute underlines the system-wide approach of the UN: “This is a problem that all of us have to address, system-wide. And we need to begin by thinking through: how can we become a global example of a standards-based organisation of best practice?” she notes. Related to this, she adds that the Secretary-General has revised the policy protecting whistle-blowers.

“The Secretary-General intends to re-connect each of us to the values and principles of this Organization: [to understand] why we signed up to begin with; what it means to work under a blue helmet or the blue flag or in association with the United Nations perhaps under a UN mandate, in every dimension,” Ms. Lute concludes.

It is a response that the Secretary-General wishes to consolidate with all stakeholders, including Member States, civil society, and international NGOs. Notably, he has called for a high-level meeting on the subject this fall, on the margins of the next General Assembly.

♦ Receive daily updates directly in your inbox - Subscribe here to a topic.
♦ Download the UN News app for your iOS or Android devices.
abuse

Underscoring that the United Nations should not be, in any way, associated with the vile and vicious crimes of rape, sexual violence, exploitation and abuse, Secretary-General António Guterres has outlined a new victim-centred approach to prevent and respond to such abuses committed by those serving under the UN flag.