Protecting refugees and assuring the safety of countries that receive them are complementary goals, a senior United Nations official today said in a special security forum that discussed denying safe havens to people who finance or commit terrorist acts, or to terrorists who try to abuse the asylum system.

“Our collective experience gained over many years has taught us that security and protection need to go hand in hand – one is not possible without the other,” Volker Türk, Assistant High Commissioner for Protection at the UN Refugee Agency (UNHCR), told the UN Security Council Counter-Terrorism Committee in New York.

There are some 21.7 million refugees around the world, some of whom are in Europe or trying to seek refuge there. While many have been welcomed with compassion, Mr. Türk said, others have faced national measures such as push-backs at borders, detention, and restricting access.

“The impact of such measures is simply the diversion of refugee movements along other routes and the aggravation of already precarious situations in regions embroiled in conflict,” said Mr. Türk, noting the threat from smugglers and trafficking, xenophobia and violence.

In contrast, Mr. Türk highlighted measures in line with the 1951 Convention relating to the Status of Refugees. Measures such as biometric registration and background screening, ensure an orderly processing of refugees while also protecting the rights of refugees and asylum seekers.

“When asylum-seekers and refugees are promptly registered and have their status determined in a fair and efficient manner, States can be more confident of who is on their territory,” said Mr. Türk.

The 15-member Committee was established in the wake of the 11 September terrorist attacks in the United States, and works to criminalize the financing of terrorism and cut safe havens to terrorists, among others. Today's briefing focused on “ Denying safe haven to those who finance, plan, support, or commit terrorist acts, or provide safe havens, and preventing terrorists from abusing the asylum system, in conformity with international law .”

One of the issues also discussed at the meeting was information sharing and need for cooperation between law enforcement and judicial authorities.

“The ability of States to assist one another quickly and successfully is an absolute necessity also for eliminating and preventing the creation of terrorists' safe havens,” said Mauro Miedico, the acting chief of the Terrorism Prevention Branch at the UN Office on Drugs and Crime(UNODC).

He urged Governments to further strengthen technology and abilities, particularly those in vulnerable regions with weak governance and criminal justice systems. 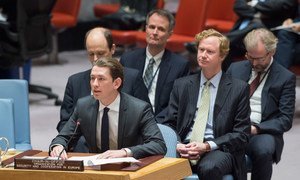 Multilateral cooperation is the only way to achieve peace, security and stability, and there is no alternative to it, Austria’s Foreign Minister told the United Nations Security Council today, underscoring the work of his country in its role as the Chair of the Organization for Security and Co-operation in Europe (OSCE).