MONUSCO/Myriam Asmani
An aerial view of the town of Kananga in DRC’s Kasaï-Central province outside which the remains of the two experts were found. (File)
5 April 2017

The United Nations peacekeeping mission in the Democratic Republic of the Congo today expressed concern about a reported rise in the number of civilian casualties in the central Kasai region as a result of clashes between the Kamuina Nsapu militia and the Congolese security forces.

The peacekeeping mission, known by its French acronym MONUSCO, said that the violence continues to result in “serious human rights violations” including “the discovery of mass graves as well as ongoing recruitment by the militias” including of children.

“The violence in the Kasais has already claimed the lives of possibly more than 400 civilians as well as a significant number of members of the security forces. It must stop,” said Maman S. Sidikou, the Special Representative of the Secretary-General in the country and the head of MONUSCO.

Mr. Sidikou stressed that there is no military solution to the violence, and encouraged the Government to intensify its efforts to find political solutions.

“At this point, intensifying the military response will only exacerbate the violence and further place civilian populations in danger,” he warned.

In today's statement, MONUSCO noted that the violence last month spread to Luebo, where violence has targeted symbols of the Government and recently released prisoners, as well as to Luiza and other regions where there are growing threats against churches.

The Mission also cautioned the military against reported civilian casualties, allegations of human rights violations and arbitrary arrests, including of minors.

In late March, the UN and regional partner organizations expressed deep concern about the situation in the Kasai region where at least two UN experts disappeared two weeks ago and dozens of police officers were reportedly found dead.

The UN, the African Union (AU), the European Union (EU) and the International Organization of La Francophonie (IOF) warned that the level of violence and reported human rights violations necessitate “an urgent response from the country's political leaders.”

The statement also called on defence and security forces to exercise restraint in the efforts to restore order, and encouraged the dialogue between the Government and the Kamuina Nsapu militia. 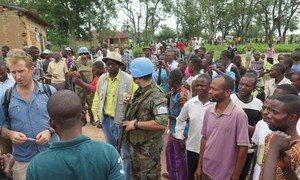 The United Nations and regional partner organizations today expressed deep concern about the situation in the central Kasaï region of the Democratic Republic of the Congo (DRC) where at least two United Nations experts disappeared two weeks ago and dozens of police officers were reportedly found dead.