EU (File photo)
Boarding a pirate vessel off the coast of Somalia.
4 April 2017

Noting that recent attacks on commercial ships off the coast of Somalia highlight the continued threat of piracy, the United Nations Office on Drugs and Crime (UNODC) has urged ships to follow advice of navies and that of the International Maritime Organization while planning passage through the region.

“After three attacks, following a lull of five years, it is clear that Somali pirates are resurgent and intent on continuing attacks on commercial shipping,” said UNODC Executive Director, Yury Fedotov, in a news release today.

“I urge the international community to be vigilant, to work in close partnership and to hold the Somali pirates accountable,” he added.

Over the course of last month, Motor Tanker (a merchant ship designed for the bulk transport of oil) Aris 13, fishing vessel Asayr 2 and cargo ship Al Kaushar were attacked by Somali pirates. While the crews of Aris 13, and Asayr 2 were released, Al Kaushar’s crew are reportedly still held hostage by the pirates.

According to UNODC, large parts of the Somali coast remain beyond the reach of law enforcement authorities and thus called on ships planning passage off the country to follow the advice of navies and the International Maritime Organization (IMO).

The UN agency added that it continued to support the trials of piracy suspects in the region and to the Somali maritime law enforcement agencies as they extend their reach around the Somali coast.

“The threat of Somali piracy has never gone away: it has been suppressed by the good work of the shipping industry and their security teams, navies, and UNODC’s support to the trial and imprisonment of 1,300 pirates,” expressed Alan Cole, the head of Maritime Crime Programme at UNODC. 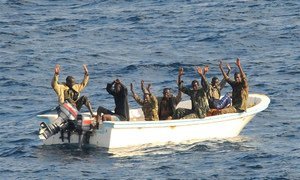 United Nations officials today reiterated a call for a comprehensive regional framework to eradicate piracy and armed robbery at sea in the Gulf of Guinea, with the Security Council stressing the importance of addressing underlying causes and strengthening justice systems and judicial cooperation in the region.