The United Nations Security Council today expressed its support for the efforts of President Faustin Archange Touadera of the Central African Republic (CAR) to restore State authority as well as for the African Union-led mediation initiative to find a political solution to the situation in the crisis-torn country.

In a Presidential Statement issued today, the 15-member body renewed its support for CAR President Touadera and welcomed his significant role to stabilize the country, promote peace and reconciliation, advance plans for disarmament, enable long-term development, and build the capacity of state institutions and basic service delivery, with the support of regional and international partners.

The Council also acknowledges the African Initiative for a Peace and Reconciliation Agreement between the Government and all armed groups in the CAR, which is aimed at sustainably promoting reconciliation and inclusive governance.

On the security front, the Council expressed concern at the ongoing clashes between armed groups, in particular around Bambari in the Ouaka prefecture, and, most recently, in Bakouma in the Mbomou prefecture, which have caused heavy civilian losses and significant population displacement.

The Council strongly condemned violence perpetrated by armed groups and their attempts to forcefully gain control of territory and resources, and urged all armed groups, in particular FPRC and UPC, to immediately stop all violence and honour their commitment to the disarmament, demobilization, reintegration and repatriation process.

The Council also renewed its support to the Secretary-General’s Special Representative Parfait Onanga-Anyanga and to the UN Multidimensional Integrated Stabilization Mission in the Central African Republic (MINUSCA) in the implementation of its mandate. 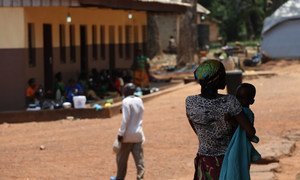