Stressing that the rates of incarceration for Australia’s indigenous peoples have reached astounding, “tsunami” proportions, a United Nations human rights expert today called on the authorities to respect the peoples’ right to self-determination, to full and effective participation in society, and to step up the fight against racism.

“High rates of incarceration were described to me as a tsunami affecting indigenous peoples […] while Aboriginal and Torres Strait Islanders make up only three per cent of the total population, they constitute 27 per cent of the prison population, and much more in some prisons,” said Victoria Tauli-Corpuz, the UN Special Rapporteur on the rights of indigenous people, at the end of her official visit to the nation.

The situation of youths and children from these communities is particularly concerning and the number of children being removed from their homes is increasing.

For instance, at a youth detention centre in Townsville, Queensland province, Aboriginal and Torres Strait Islander children constituted 95 per cent of the children detained.

“These children are essentially being punished for being poor and in most cases, prison will only aggravate the cycle of violence, poverty and crime,” noted Ms. Tauli-Corpuz. “I found meeting young children, some only 12 years old, in detention the most disturbing element of my visit.”

I found meeting young children, some only 12 years old, in detention the most disturbing element of my visit

“As already recommended by the UN Committee on the Rights of the Child, I urge Australia to increase the age of criminal responsibility. Children should be detained only as a last resort,” she highlighted. The expert also noted that Aboriginal children were seven times more likely than non-indigenous children to be in contact with the child protection system or to be subject to abuse or neglect.

She also noted that while numerous policies have been adopted to address the socio-economic disadvantage of indigenous peoples, these have failed to deliver on targets in the areas of health, education and employment.

In particular, Ms. Tauli-Corpuz criticized the Government programme known as the Indigenous Advancement Strategy which was initiated in 2014 and involved a large budget cut in funding for support programmes.

“The implementation of the strategy has been bureaucratic, rigid and has wasted considerable resources on administration. Travelling across the country, I have repeatedly been told about its dire consequences,” she said, pointing to threats that targets on closing the gap in areas such as life expectancy, infant mortality, education and employment would not be met.

Urging for a comprehensive approach including specific objectives on reduction of detention rates, child removal and violence against women, the UN rights expert also called on the Government to forge a new relationship with the national representative body for indigenous peoples, the National Congress of Australia’s First Peoples, and restore their funding.

In her remarks, Ms. Tauli-Corpuz also spoke of effective community-led initiatives in a range of areas including public health, housing, education, child-protection, conservation and administration of justice, and their potential in making immediate significant positive changes in the lives of Aboriginal and Torres Strait Islanders.

The rights expert will present a comprehensive report on her two-week long mission to the Geneva-based UN Human Rights Council at its session in September this year. 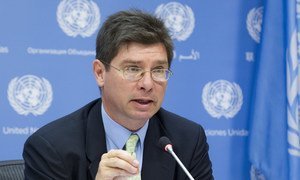