<a href=http://www.grida.no/photolib/detail/elephants-loxodonta-africana-at-waterhole-etoscha-national-park-namibia_857b>UNEP GRID Arendal/Peter Prokosch</a>
Between 2010 and 2012, 100,000 elephants were killed for their ivory in Africa.
3 April 2017

Applauding the Chinese Government’s closure of many of its ivory factories and retail outlets, the United Nations environment wing has called on other countries and territories to follow China’s example and improve the survival prospects for elephants across the world.

The move, announced by the country’s State Forestry Administration, represents the first concrete steps in an “almost complete” ban on the domestic trade in ivory. It was announced last year and expected to be fully implemented by the end of 2017.

“This is an historic step and may well be a turning point in our fight to save elephants from extinction,” the Executive Director of UN Environment Programme (UNEP), Erik Solheim, said in a news release issued late last week.

“The true measure of the success of these new rules will be how well they are enforced,” he added.

According to UNEP, the closures on 31 March represent the end of business for around one-third of officially sanctioned ivory-carvers and licensed retailers in one of the world’s largest markets for the sale of ivory, where elephant tusks are used to make decorative objects and as traditional gifts or displays of wealth.

With 100,000 elephants killed in the last decade alone and only around 500,000 left worldwide, bans like this cannot happen soon enough.

Mr. Solheim also pledged to work closely with the Chinese government to ensure a healthy natural legacy remains for the world’s children and grandchildren.

Also, following the announcement of the ban, ivory prices have fallen by almost two-thirds and public awareness campaigns have played a key role in reducing the demand. These mean that the killing of elephants for their tusks and illicit trade of the ivory is not as lucrative as it once was.

Such legislation, enforcement and a change in public attitudes will not only protect wildlife but also benefit people who live in the countries where elephants are found.

Furthermore, combatting illegal trade in ivory helps the fight against corruption as well as helps curb the funding that finance the activities of criminal gangs.

What’s good for the elephants is good for everyone. 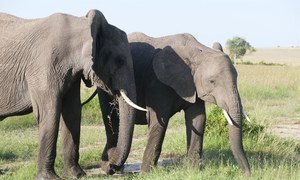 With the fate of the world's wildlife soon to be in the hands of the next generation, the United Nations is observing this year's World Wildlife Day with a call to harness the power of young people's voices in conservation efforts.