With six years of conflict in Syria causing more than $16 billion of lost crop and livestock production and destroyed farming assets, a United Nations report published today stressed the need to reboot and kick-start the agricultural sector now to dramatically reduce the need for humanitarian aid and migration.

“Ramping up investment in the recovery of the agriculture sector could dramatically reduce the need for humanitarian aid. It could also have a significant impact on stemming the flow of migrants,” said Food and Agriculture Organization (FAO) Director-General José Graziano da Silva on the report, which was released ahead of an international conference on Syria's future in Brussels.

The report, Counting the Cost: Agriculture in Syria after six years of crisis, presents the first comprehensive nationwide assessment of the damage of the war on the agriculture sector. The assessment, which took place in August and September 2016, included surveys of more than 3,500 households across Syria, interviews with more than 380 community groups and analysis of primary and secondary agricultural data.

Of the $16 billion total bill, the cost of damage to assets - such as tractors, machinery, commercial farms, veterinary clinics, animal sheds, greenhouses, irrigation systems and processing facilities - is estimated at over $3 billion, though this number is likely to rise significantly when the full extent of damages in the main conflict areas can be better assessed.

About $6.3 billion of the total is made up of damage and loss in crop production. In the livestock sector, damage and loss was calculated at around $5.5 billion, and in the fisheries sector the estimate is almost $80 million.

The initial cost of rebuilding the agriculture sector over a three-year period is estimated at between $10.7 and $17.1 billion in total, depending on whether there is no change in the conflict, a partial return to peace or a full return to peace.

The report outlines a response plan under each of these possible scenarios, including addressing underlying issues such as sustainable water use for irrigation.

Rural households are clear about what they require to resume or boost their agricultural production. Basic supplies such as fertilizer, seeds and veterinary medicine for livestock are urgently needed. After those needs have been met, emphasis should shift to credit, processing and marketing support, and repairing critical assets such as irrigation infrastructure.

Around 95 per cent of communities surveyed felt that if they were assisted with even basic agricultural support such as seeds, fertilizers and fuel to power irrigation pumps, it would reduce the number of people abandoning rural areas to find opportunities elsewhere, and also encourage the return of migrants and internally displaced people. 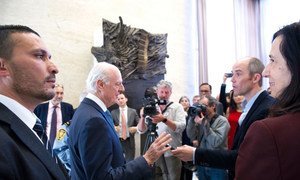 Incremental progress but ‘we’re not yet there,’ UN mediator on Syria reports

The latest round of the United Nations-facilitated intra-Syrian talks concluded today in Geneva where UN envoy Staffan de Mistura told journalists the discussions had been serious and the parties engaged, but “we’re not yet there.”