UNICEF/Holt (file)
A young girl stands in front of the temporary shelter at the UN Protection of Civilian Camp (POC) Bentiu, South Sudan. Thousands have fled Leer as fighting intensified between rebel and Government soldiers.
30 March 2017

The ongoing conflict in South Sudan is affecting food security in some of the country's more “stable” states, the head of United Nations peacekeeping operation there has said.

“Dwindling provisions arriving in the town and skyrocketing food prices have meant that places like Aweil, which are generally peaceful, have suffered the effects of the conflict taking part in other parts of the country,” said David Shearer, the head of the UN Mission in South Sudan (UNMISS), during a visit to Aweil in the country's north.

“It is imperative that fighting stops, so the citizens of the world's newest nation can live in peace and enjoy the benefits of independence,” he added.

The insecurity has directly affected the cost of goods in greater Aweil. Mr. Shearer heard from UN humanitarian agencies working in the region how many families had migrated north to Sudan because they could either not produce crops or could not afford the high price of staple foods in the market.

Those agencies have stepped in to provide emergency humanitarian aid in a region where the UN Food and Agriculture Agency (FAO) says 52 per cent of people are “food insecure.”

The Governor of Aweil state, Ronald Ruay Deng, told Mr. Shearer that his administration was doing all it could to “move our people from dependency on emergency food aid to a more resilient rural agricultural” model of production, including the piloting of a new community farming approach to feed the most vulnerable people. 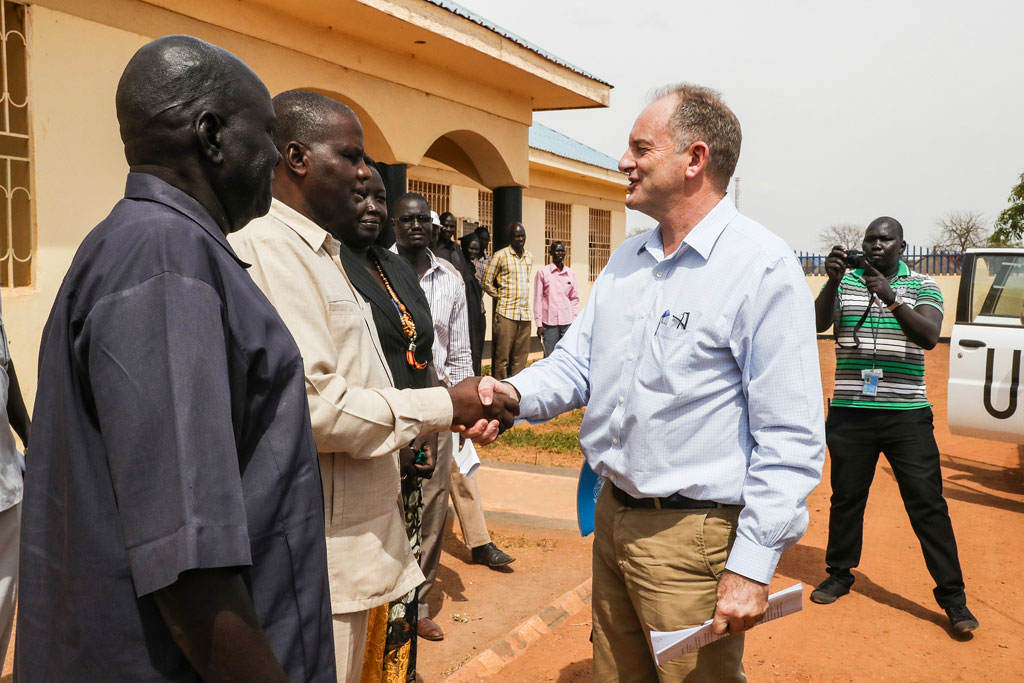 Mr. Shearer also heard about the efforts under way to build peaceful understanding between communities, particularly pastoral communities who arrive on a seasonal basis from Sudan to share water and grazing land with the residents of greater Aweil.

Today, the first convoy of 27 trucks carrying an initial 1,200 metric tons of sorghum started moving from El Obeid in central Sudan towards Bentiu in South Sudan. The convoys will take at least five days to complete the 500 kilometre journey.

In the next few weeks, WFP plans to deliver 11,000 metric tons of sorghum – including 1,000 metric tons donated by the Government of Sudan – in seven convoys of 30 to 40 trucks. This is enough food to feed 300,000 people for three months.