UNICEF/Holt
A medical practitioner uses a Mid Upper-Arm Circumference (MUAC) measuring tape on a child indicating Severe Acute Malnutrition (SAM) at a mobile clinic at a temporary settlement for families forced to move because of drought near the town of Ainabo, Somalia.
30 March 2017

As the spectre of famine hangs once again over Somalia, early numbers show an increasing number of children suffering from severe acute malnutrition and cholera or acute watery diarrhoea – a combination that killed many children in the famine of 2011, the United Nations Children’s Fund (UNICEF) said today.

“Children are dying from malnutrition, hunger, thirst and disease. During the 2011 famine, around 130,000 young children died, about half of them before famine was declared. We are working with partners around the clock to make sure that doesn’t happen again,” said Leila Pakkala, UNICEF Regional Director for Eastern and Southern Africa.

More than 35,400 children suffering from severe acute malnutrition were treated with life-saving therapeutic food at hundreds of nutrition centres across Somalia in January and February, a 58 per cent increase over the same period in 2016.

As of 28 March, more than 18,400 cases of cholera/acute watery diarrhoea had been reported since the beginning of the year, far surpassing the 15,600 cases reported in all of 2016. The majority of the cases are among young children.

“These numbers are a wake-up call,” said Ms. Pakkala, after speaking with displaced families and patients at a cholera treatment centre in Baidoa, Somalia.

There are no precise figures currently available for the number of children who have died due to hunger or malnutrition, in part because many succumb to disease and infection. But children suffering from SAM are nine times more likely to die of disease than a well-nourished child. During the 2011 famine, the biggest killers were diarrhoea and measles. 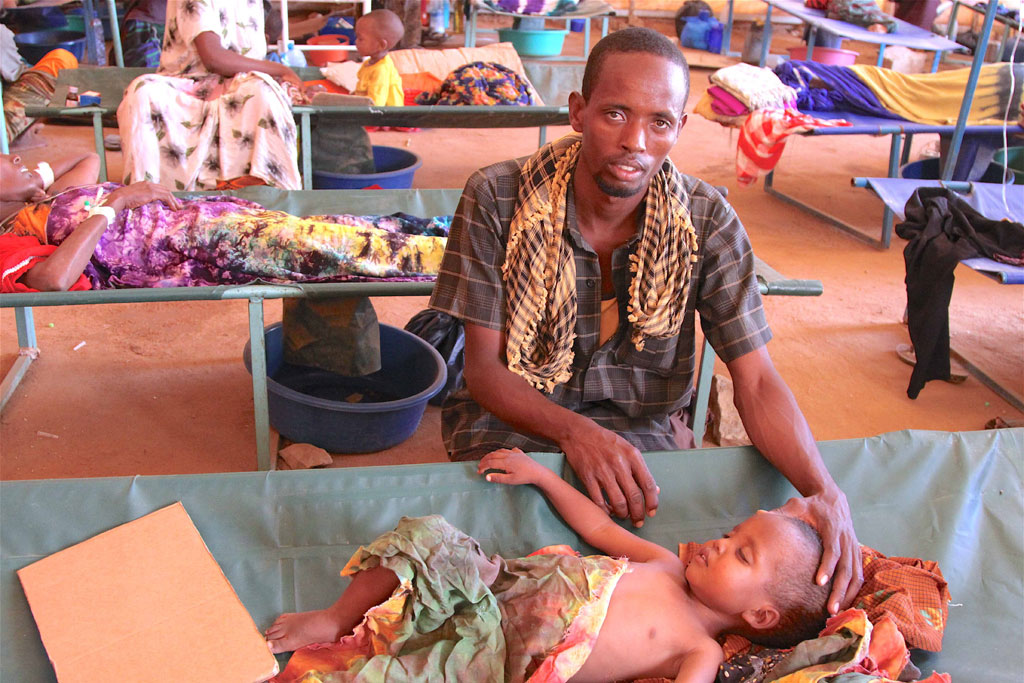 Nur Ismail, 3, is treated for acute watery diarrhoea at the cholera treatment centre in Bay Regional Hospital, Baidoa, Bay region of Somalia. His father, Hassan Ismail, is by his side. Photo: UNICEF/Athanas Makundi

Six years since famine was declared in parts of south-central Somalia, the country is once again on the brink of catastrophe. This time, the drought is more widespread, affecting Somaliland, Puntland and the country’s pastoral areas, in addition to the centre and southern parts of Somalia, which were hardest-hit in 2011.

In February, UNICEF projected that 944,000 children would be acutely malnourished in 2017, including 185,000 children suffering from severe acute malnutrition who would need urgent, lifesaving support. That number could shoot up, even if the next rains due to start in April come on time, and in full.

UNICEF Somalia has raised its 2017 funding requirement from $66 million to $147 million, with a funding gap of 54 per cent as of mid-March.

“In 2011, funding poured in after the official declaration of famine in July,” said Ms. Pakkala. “This year, many donors have come forward early. But the worst may still be ahead of us. We have a small window to prevent a massive loss of life.”

Somalia: A moment of hope amid tragedy, says UN envoy

Noting that Somalia faces a number of “daunting difficulties” after decades of conflict, a senior United Nations official today highlighted that there is also a new momentum in the country for fresh political engagement amongst its people with the recent electoral process.