“The new violence and exactions against civilians is worrisome as they jeopardize the gains obtained at the highest price to help those whose vulnerability has been exacerbated. This situation is critical as the means of protection tend towards their limit,” said the Interim Humanitarian Coordinator for CAR, Michel Yao, in a news release from the UN Office for the Coordination of Humanitarian Affairs (OCHA).

The release said that the prefectures of Ouaka, Haute Kotto and Mbomou fell prey to the fresh waves of violence resulting from clashes between the armed groups.

OCHA said this new deterioration comes at a time when the consequences of the violence which studded the CAR between September 2016 and February 2017 are still heavily felt. In this short period, more than 100,000 newly displaced people have been registered.

Mr. Yao expressed his great concern about the protection of civilians and the systematic targeting of vulnerable communities. “This dangerous trend blurs the nature of the conflict and is highly reprehensible under international law,” he warned.

He called on all parties to the conflict to put the protection of vulnerable civilian populations above all other considerations and to give priority to political dialogue in order to reduce the suffering of populations affected by the upsurge of violence.

Mr. Yao also urged the parties not to infringe the freedom of movement of humanitarian actors so that they can help those in need.

“The Central African Republic runs the risk of becoming a chronic crisis ignored and neglected by the rest of the world at a time when the humanitarian community and the government have decided to pool efforts to mobilize the funds for life saving activities,” he said.

He recalled that at the end of the first quarter of 2017, only five per cent of $399.5 million in funding for humanitarian needs was received. 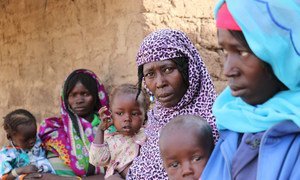 Senior officials today called for strong political support and adequate resources for the United Nations peacekeeping force in the Central African Republic (CAR), where half of the population urgently needs aid, according to the latest United Nations figures.