The United Nations envoy for Yemen has urged the members of the Security Council to put pressure on the warring parties in that country to engage constructively in discussing the peace process framework he had presented.

“The Government of Yemen should agree to engage in talks based on the framework, and Ansar Allah and the General People's Congress must end their long-standing refusal to undertake serious discussions on security arrangements,” Ismail Ould Cheikh Ahmed, the United Nations Special Envoy for Yemen, told the Council during a closed-door meeting, according to a note issued overnight by the office of spokesperson for the UN Secretary-General.

The Special Envoy had presented to the parties a framework that included a set of sequenced political and security measures which were designed to ensure a rapid end to the war, withdrawals of military formations and disarmament in key areas, and the creation of an inclusive transitional government.

The note also stated that the Special Envoy expressed his deep concern about the rapidly deteriorating humanitarian and economic situation amidst a worrying escalation of military operations.

“The only real way to prevent a worsening of the situation is to reach a peaceful resolution to this tragic conflict which has been going on for too long. It is my firm belief that further military escalation and humanitarian suffering will not bring the parties closer together,” the envoy told the Council.

Presenting a bleak picture of the current situation, he warned that the impact of the conflict on the economy and food security will be felt long into the future and jeopardise attempts to restore stability, and reiterated his call to the international community to speak with a unified, consistent and bold voice to the parties now more than ever, the note stated.

The Special Envoy concluded his remarks by urging the Council to “use all of its diplomatic weight to push for the relevant parties to make the concessions required to reach a final agreement before more lives are lost. We must give peace another chance,” the note said. 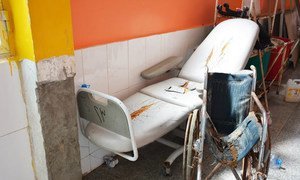 More than 14 million people in Yemen have no access to health services, the United Nations health agency today said, warning that transportation of medical personnel and treatment for the injured is getting increasingly difficult as this week the fighting enters its third year.