The only way to achieve socially sustainable supply chains is if human rights are protected and respected, a group of UN experts said today in an open letter addressed to G20 leaders currently meeting in Geneva.

Michael Addo, the current head of the Working Group said: “All too often, global supply chains are associated with human rights violations and abuses such as unsafe working conditions, child and forced labour, livelihoods destroyed by toxic industrial wastes, land seizures without compensation, and persecution of those who speak up against such abuse.”

Millions of lives are affected by the actions of companies in global supply chains and as such, governments and companies have enormous potential to promote sustainable development and uphold human rights, as long as they work together to do so, the working group noted.

The letter calls on governments to “lead by example,” in their roles as economic actors in ensuring that state-owned or controlled business respect human rights.

“The G20 represents 85 percent of global economic output, 75 percent of world trade, and two-thirds of the world’s population, and includes both major ‘developed’ and ‘emerging’ economies,” Mr. Addo noted.

“G20 leaders are therefore uniquely placed to address the human rights risks and impacts associated with global supply chains. They also have a unique responsibility to demonstrate leadership on this critical issue for our time,” he said.

The UN Working Group also said that any commitments to promoting sustainable supply chains must be founded on the globally-agreed UN Guiding Principles on Business and Human Rights.

The Working Group on human rights and transnational corporations and other business enterprises was established by the UN Human Rights Council in June 2011. Along with current Chair Mr. Addo, its members are: Surya Deva, Dante Pesce, Anita Ramasastry and Pavel Sulyandziga.

The Working Group reports to the UN Human Rights Council and to the General Assembly. Its experts Special Procedures are independent and are not UN staff. They are also independent from any government or organization. They serve in their individual capacity and do not receive a salary for their work. 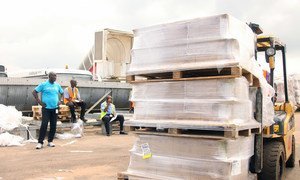 In collaboration with partners and as a part of a global supply chain network, the United Nations emergency food relief agency has set about developing the first-ever information platform to better manage supply chains and efficiently match deliveries with demand in responding to large-scale health emergencies such as pandemic outbreaks.