More than 14 million people in Yemen have no access to health services, the United Nations health agency today said, warning that transportation of medical personnel and treatment for the injured is getting increasingly difficult as this week the fighting enters its third year.

At least 7,719 people have been killed and 42,922 injured since 19 March 2015, the UN World Health Organization (WHO) reported, but the actual numbers are believed to be higher.

“More than half of all health facilities are closed or functioning only partially,” Tarik Jasarevic, a WHO spokesperson, told journalists in Geneva.

Mr. Jasarevic, who was in Yemen in February, said that at least 274 health facilities had been damaged or destroyed as a result of the conflict, and some 44 health workers either killed or injured.

He noted also a shortage of medicines and specialized staff, such as surgeons, many of whom have fled the country.

“For more than six months, health facilities in Yemen had received no financial support to cover operational costs and staff salaries,” the spokesperson said.

As a result, health facilities such as the chemo-dialysis centre in Hudaydah, is on the brink of ceasing operations, as there was no more fuel to run the obsolete chemo-dialysis machines, Mr. Jasarevic noted. Without the facility 600 people with kidney failure would likely die.

Day and night, dozens of kidney patients crowd the corridors of the Dialysis Centre in Hudaydah, Yemen, waiting for their sessions. Photo: WHO Yemen

The long-term impact of the conflict is also having detrimental effects on the country’s food system and infrastructure.

Malnutrition is on the rise with close to half-a-million children suffering from severe acute malnutrition, with one out of every two children under the age of five stunted in their growth.

This is “a 200 per cent increase since 2014 – when that number was at 160,000 – raising the risk of famine,” said Christophe Boulierac, spokesperson for the UN Children’s Fund (UNICEF).

UNICEF estimates that every 10 minutes, at least one child dies in Yemen as a result of preventable causes such as malnutrition, diarrhoea or respiratory tract infections.

In addition to malnutrition, children face malaria and dengue fever, both of which have been on the rise in the past two months. An outbreak of cholera has been contained, Mr. Jasarevic said.

WHO, UNICEF and other UN agencies and their partners are providing aid but resources are stretched. For 2017, for example, the health cluster appealed for $322 million.

Meanwhile, Humanitarian coordinator in Yemen, Jamie McGoldrick, denounced a raft of atrocities taking place in Yemen, including reportedly at least 1,540 children killed; 2,450 children injured; and over 1,550 children recruited to fight or to perform military related duties. Moreover, Hundreds of people have been killed in mosques, markets, funeral wakes, schools and hospitals. 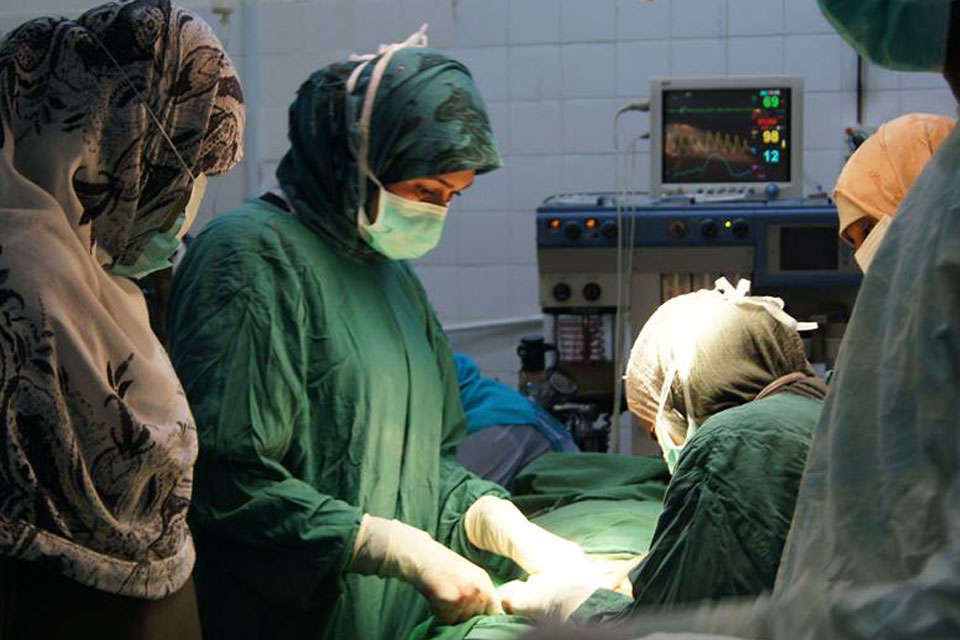 Patients in Yemen still struggle to access health services, including surgical care, due to critical shortages of specialized health staff amid a financial crisis and no operational budget for public health facilities. Photo: WHO/Sadeq Al-Wesabi

“With malnutrition amongst children at an all-time high and at least two million children out of school, the conflict and its consequences is jeopardizing future generations in Yemen,” he said, explaining that more than 11 per cent of Yemen’s entire population has been forced to move from their homes in search of safety and livelihoods. One million of these people have sought to return to their areas of origin only to find destruction and lack of opportunities to re-start their lives.

Stressing that no humanitarian response can meet the increasing needs that the war is causing, Mr. McGoldrick said: “The people of Yemen have suffered long enough […] Only peace can end the suffering and I continue to call on all the parties to return to the negotiating table and to make effective their responsibilities to civilians across Yemen.”

AUDIO: With famine looming in Yemen, the country is “on a knife’s edge” and in desperate need of cash from international donors to avert disaster, said Jamie McGoldrick, the UN Resident Coordinator in the country.

As the escalation of the conflict in Yemen enters its third year this week, the top United Nations humanitarian official has called on the parties to the conflict to commit to political dialogue and resolve the situation or risk an unending manmade crisis.