UNHCR/Ivor Prickett
A family climbs out of their destroyed home to flee minutes after an ISIS suicide car bomber detonated his vehicle on the street outside their home in the Al Andalus neighbourhood of Mosul, Iraq.
28 March 2017

The top United Nations human rights official today deplored the massive loss of civilian lives in the western sections of Iraq’s Mosul city in recent days due to actions by the Islamic State of Iraq and the Levant (ISIL/Da'esh) terrorists as well as airstrikes by the Government forces.

“ISIL’s strategy of using children, men and women to shield themselves from attack is cowardly and disgraceful. It breaches the most basic standards of human dignity and morality. Under international humanitarian law, the use of human shields amounts to a war crime,” said UN High Commissioner for Human Rights Zeid Ra’ad Al Hussein in a news release.

“The conduct of airstrikes on ISIL locations in such an environment, particularly given the clear indications that ISIL is using large numbers of civilians as human shields at such locations, may potentially have a lethal and disproportionate impact on civilians,” he added.

According to information verified by the High Commissioner’s Office (OHCHR) and the UN Assistance Mission in Iraq (UNAMI), at least 307 people were killed and another 273 wounded between 17 February and 22 March.

Civilians used as ‘human shields;’ others gunned down by sniper fire

The most deadly incident occurred on 17 March, when an airstrike – reportedly targeting ISIL snipers and equipment – hit a house in al-Jadida neighbourhood in western Mosul. Witnesses reported that ISIL had previously forced at least 140 civilians into the house to be used as human shields. They also said that ISIL had booby-trapped the house with improvised explosive devices (IEDs).

So far, official figures indicate at least 61 people were killed in this single incident.

In another serious incident, on 22 March, an airstrike hit a residential building in Rajm Hadid neighbourhood in western Mosul. ISIL reportedly filled the house with people from the surrounding neighbourhood, including children, and then used the house to launch rocket-propelled grenades against the Iraqi Security Forces. The airstrike killed a seven-year-old girl and trapped eight other children under the rubble, seven of whom were later found and taken to hospital.

In addition, between 23 and 26 March, reports were received that at least 95 civilians were killed in Risalah, Nabils, Uruba and Sainaah al-Qadimah neighbourhoods in western Mosul as a result of shelling, vehicle-based and other explosive devices planted by ISIL, as well as by ISIL snipers.

The UN human rights chief also called on the Iraqi Government and its partners “to undertake an urgent review of tactics to ensure that the impact on civilians is reduced to an absolute minimum, in full accordance with international humanitarian law.” 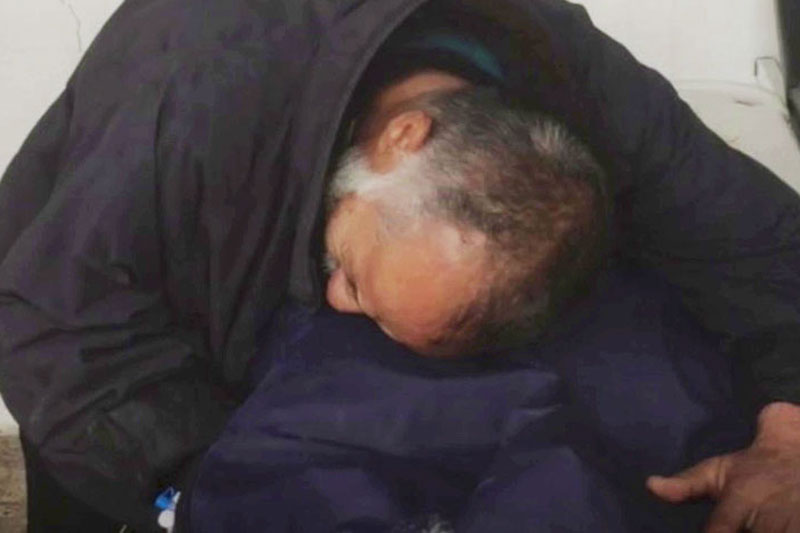 Abdullah gripped the body bag of five-year-old Sara Alaa, his granddaughter, who was shot by ISIL while their family was trying to escape Mosul, Iraq. Photo: IOM

Thousands of displaced people are losing their lives while fleeing the fighting in Mosul, said IOM, recounting the story of a young girl shot by an ISIL sniper. “When [she] arrived at the field hospital, she was already dead,” explained the surgeon on call.

VIDEO: The UN human rights office, OHCHR, has urged civilian protection in the Iraqi city of Mosul, where reports say at least 307 civilians have been killed, and 273 injured since 17 February 2017.

Victim after victim, all from Mosul al-Jadida, streamed into the field hospital that morning telling a similar story – that ISIL deliberately shot at them as they tried to escape. They shot to kill, not differentiating between man, woman, child or the elderly.With ISIL using civilians as human shields, even forcing their way into homes where families have gathered for safety and firing mortars from rooftops of houses with civilians in the lower floors, an increase in the number of innocent people being killed has been reported in recent weeks, said IOM.