UNHCR/Achilleas Zavallis
Waiting for their ferry departure from Lesvos, this family of Syrian refugees is being relocated to a camp in Larissa, as part of an effort by UNHCR to transfer vulnerable asylum-seekers from the islands to mainland Greece, where better living conditions are available.
27 March 2017

The head of the United Nations refugee agency today noted the need for more accommodations on the Greek mainland to help improve conditions at reception centres on the Greek islands.

“The situation in Greece can be managed,” said Filippo Grandi, UN High Commissioner for Refugees. “But to achieve this, firm commitment is needed on all sides.”

Mr. Grandi called on European Union Governments to provide strong support for Greece: “More solidarity and responsibility sharing among across Europe is needed.”

The High Commissioner also renewed his call to the Greek Government for clear coordination structures, with well-defined roles and responsibilities for all actors.

As of 20 March, only 10,000 asylum-seekers had left Greece for other European countries.

The UN agency said that is has been working with the Greek Government over the past months to find alternative sites for temporary housing, as well as to help some refugees who were to remain in Greece to more easily integrate to the country's social culture.

Progress in reception conditions will also help prevent and fight sexual and gender based violence, to which many vulnerable asylum-seekers, including women and children, are exposed in the sites.

More attention is needed to the length and quality of the asylum procedures and reception conditions on the islands, said the High Commissioner.

“This will allow for more and faster transfers to the mainland and prevent sites on the islands from falling back into the dire conditions and the overcrowding we have witnessed in the past months,” he added, noting that UNHCR supported some 7,000 of the more than 10,000 transfers organized since June 2016.

The UNHCR recommendations also include accelerating the pace of reuniting people with their families and building self-reliance among refugees. 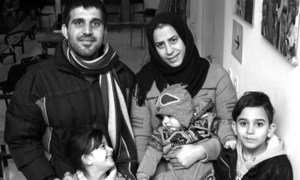 European Union countries have welcomed more than 14,000 asylum-seekers from Greece and Italy since October 2015, the United Nations migration agency today announced, encouraging EU member states to follow through on their commitments.