United Nations peacekeeping is becoming more agile and capable, the outgoing chief today said, even as the cost for each peacekeeper fell 16 per cent in recent years, dropping the entire budget of the blue helmets worldwide to around $7.2 billion.

“It’s a lot of money at face value, but it’s 0.4 per cent of world military expenditure,” Hervé Ladsous, the Under-Secretary-General for Peacekeeping Operations, told journalists in New York during his final briefing in this post.

“No other army has done what the United Nations has done over the past six years,” he added. The price for UN peacekeeping operations is currently $7.2 billion, down from $8.2 billion in 2011. “We diminished the cost per peacekeeper by 16 per cent without any diminution in the level of equipment.”

Comparing UN costs with the price tag for similar operations done by Governments alone, Mr. Ladsous said the UN operation cost was one-quarter of such operations.

Even as the costs have decreased, the agility and capacities of UN peacekeeping has strengthened, Mr. said Ladsous.

For example, the UN will shortly have a permanent capacity to deploy a vanguard brigade within 30 to 60 days, a “very useful” improvement over the current six to eight months to deploy a unit.

Technological advances, such as surveillance drones, balloons and cameras, are helping to bring “peacekeeping into the 21st century”

Another example of progress cited by Mr. Ladsous is the work under way to create a framework policy on intelligence which will save lives and allow peacekeepers “to do a better job.” Technological advances, such as surveillance drones, balloons and cameras, are helping to bring “peacekeeping into the 21st century,” Mr. Ladsous added.

The geographic makeup of the peacekeepers is also changing, with an increased number of units from the so-called Global North, which incorporates countries from North America and Europe, as opposed to the Global South, which consists of South America, Asia and Africa.

“When I can in in 2011, 95 per cent of peacekeepers were from the Global South,” said Mr. Ladsous. “Now we have more countries from the Global North, from Europe, the European Union, in Mali and in Central Africa.”

Another key aspect of change in peacekeeping is their ability to adapt to the situation in each country and in creating exit strategies “because missions are not eternal,” Mr. Ladsous said.

He noted that three peacekeeping operations – in Côte D’Ivoire, Haiti and Liberia – are expected to close down this year.

‘Peacekeeping is about political solutions’

The Security Council “is not always as supportive as it should be” in such circumstances, nor in instances where UN ‘blue helmets’ should be sent.

One of the greatest challenges, however, is managing expectations of UN Member States, donor countries and other actors.

“The heart of the mandate is about protection of civilians. This is an extremely difficult issue. Yet we cannot have a peacekeeper behind every single citizen in the theatre,” said Mr. Ladsous.

While it is difficult to quantify, UN peacekeeping saves lives, the outgoing chief said. Pointing to South Sudan, where he just visited with the incoming chief, Jean-Pierre Lacroix, Mr. Ladsous said the UN saved at least 220,000 lives in South Sudan alone.

Among other issues discussed in his final press briefing was the recent sexual exploitation and abuse report, asymmetrical attacks on peacekeepers, and uncooperative Governments hosting peacekeeping operations. 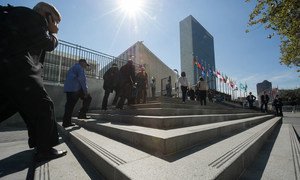