UNICEF/Henry Bongyereirwe
More than 190 000 polio vaccinators in 13 countries across west and central Africa will immunize more than 116 million children in late March 2017.
24 March 2017

More than 116 million children are set to be immunized against polio starting tomorrow in one of the largest of its kind synchronized vaccination campaigns across west and central Africa, United Nations agencies today announced.

All children under five years of age in the 13 countries will be simultaneously immunized in a coordinated effort to raise childhood immunity to polio across the continent, the UN World Health Organization (WHO) and the UN Children's Fund (UNICEF) said in a press release.

Twenty years, ago, “every single country on the continent was endemic to polio, and every year, more than 75 000 children were paralysed for life by this terrible disease. Thanks to the dedication of governments, communities, parents and health workers, this disease is now beaten back to this final reservoir,” said Matshidiso Moeti, WHO Regional Director for Africa.

Of particular concern are the five Lake Chad Basin countries. Four children were paralysed by the disease last year in north-eastern Nigeria where insecurity cut off health access. This area is one of the few where polio is active.

“Polio eradication will be an unparalleled victory, which will not only save all future generations of children from the grip of a disease that is entirely preventable – but will show the world what Africa can do when it unites behind a common goal,” said UNICEF Regional Director for West and Central Africa, Marie-Pierre Poirier.

Organizers said that more than 190,000 polio vaccinators will deliver bivalent oral polio vaccine (bOPV) to every house across all cities, towns and villages of the 13 countries.

“Volunteers and health workers will work up to 12 hours per day, travelling on foot or bicycle, in often stifling humidity and temperatures in excess of 40°C. Each vaccination team will carry the vaccine in special carrier bags, filled with ice packs to ensure the vaccine remains below the required 8°C,” according to the press release.

The polio campaign will run through 28 March.

Anti-polio campaign succeeding in Central Africa despite challenges: WHO 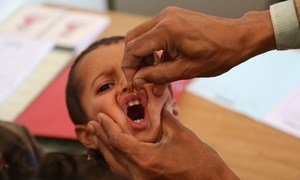 Amid escalating violence, the United Nations humanitarian agency for children and its partners have completed the first round of a nationwide door-to-door vaccination campaign reaching five million children under the age of five with oral polio vaccine and vitamin A supplementation.